What to look for at CES 2020: 8K TV, the passenger economy and ‘smart everything’ 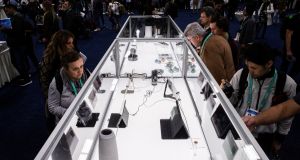 For 2020, 170,000 visitors are expected to see the latest products, both serious and silly, from 4,500 companies in fields as various as the internet of things, 5G and augmented reality

The world’s biggest technology event will kick off the new decade in Las Vegas on Tuesday, with some of the world’s best-known companies vying with hundreds of start-ups to define the next generation of smart devices and digital services.

CES, which started out as a small gadgetry fair in 1967, now hosts an ever-growing proliferation of chipmakers, telecoms groups and car manufacturers for what is a wacky but often accurate glimpse into the future of tech.

In previous editions, the big players have gone all out. Last year Google assembled a rollercoaster-style train just to ferry passengers through a sequence of its own rooms - part of an elaborate demonstration of its voice-activated Google Assistant, all set to a Disney-style musical number.

For 2020, 170,000 visitors are expected to see the latest products, both serious and silly, from 4,500 companies in fields as various as the internet of things, 5G and augmented reality. The event has also been given a political edge by the planned appearance of Ivanka Trump, who has been invited to speak on “the future of work”.

Here are the big themes likely to define this year’s event.

Augmented reality has been more hype than reality in the past few years, with most consumers’ experiences limited to entertainment offerings such as video-chat face filters and the game Pokémon Go.

But the real breakthrough may arrive with AR glasses - a technology that many believe will one day supplant smartphones by projecting a virtual phone screen in front of your eyes.

Today the technology is bulky and expensive, but by 2023 it could be a $31 billion (€27.7 billion) market, according to projections from Market Research Future.

Kevin Westcott, head of US telecom, media and entertainment at Deloitte, said that the faster internet speeds of 5G could be a major catalyst for the development of AR glasses’ functionality - beginning with gaming.

“Think about playing one of these massive multiplayer games in real life with hundreds of thousands of people competing in live environments,” he said.

Paul Travers, chief executive of Vuzix, a publicly traded company that sells a variety of smart glasses, acknowledged that the technology probably won’t be mainstream for several years, but he argued that the pieces are falling into place for it to move into real life applications.

“This revolution is right around the corner,” he said. “Smartphones are heading the way of the dodo bird.”

At least a quarter of Americans own a voice-activated smart speaker such as an Amazon Echo or Google Home device, according to the Pew Research Center. But most users rely on such assistants for limited tasks such as setting alarms and playing music.

Over the coming year, however, the technology is expected to mature, with more “skills” being added to devices’ repertoires as they become increasingly central to our day-to-day lives.

According to Mr Westcott, 2020 marks the dawn of “smart everything” - where devices ranging from thermostats to cars will connect to the internet, get smart and talk back to us.

“Before the app economy, nobody thought we’d have all the types of services we have today,” he added. “We are at the precipice of the next generation of innovation.”

For many, televisions do not need to get any bigger or better - particularly when improvements in resolution are often near-impossible to discern with the human eye.

But that won’t stop LG, Samsung and China’s TCL from bringing their latest 8K models to the event, offering quadruple the pixel resolution of Ultra HD or 4K TV sets.

LG has already announced it will be showing off eight such TVs, ranging from 65-inch to 88-inch models, each equipped with AI technology that allows them to apply the ideal picture and sound settings to the content being shown.

Paolo Pescatore, analyst at PP Foresight, called the newest displays “dazzling”, but admitted they were likely to remain “prohibitively expensive” for most consumers for the foreseeable future.

Even those with deep pockets are likely to find their use of the devices will be limited for several years while display technology remains ahead of the broader ecosystem feeding it.

“Let’s not forget there is still a distinct lack of 4K programming with the majority of TV channels still in HD,” he said.

Despite not being known for unveilings of new models, CES has become one of the most important car shows in the world, primarily because it showcases the latest developments at the intersection of the tech and automotive industries.

This year, a host of brands and suppliers are set to show off their latest wizardry for autonomous vehicles, with Yandex, Russia’s biggest tech group, even hoping to offer rides in its self-driving cars - without a safety driver involved.

Of particular interest to the mobility industry is how humans will spend their time in cars when they no longer need to operate them. Intel has estimated this “passenger economy” will be a $7 trillion market by 2050, and carmakers are eager to demonstrate their readiness for it.

BMW, for instance, plans to deck out the interior of one of its electric i3 vehicles in the style of “a boutique hotel”.

Meanwhile, in more unconventional modes of transportation, the Chinese scooter maker Segway-Ninebot will be presenting a sit-down version of its self-balancing personal transporter designed for malls and airports at CES. The S-Pod, inspired by the “gyrosphere” in the 2015 film Jurassic World, can travel at nearly 40km/h. – Copyright The Financial Times Limited 2020