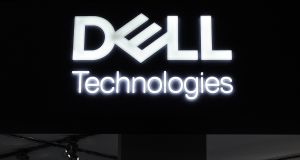 Dell Technologies Capital has turned its attention to machine learning and artificial intelligence, with the technologies making up a third of the 24 investments it completed last year.

The remainder were in companies involved in security, next-generation infrastructure and developer ecosystem.

The investment arm of the global corporation has invested in a total of 81 companies since it was established in 2012. It had been quietly operating away from the public or media focus until the formal announcement to combine the venture arms of Dell and EMC was unveiled at the company’s trade show, Dell Technologies World, in Las Vegas last year.

Among its success stories are 11 exits including three stock flotations – DocuSign, MongoDB and Zscaler - worth a collective $11 billion (€9 billion). Dell Technologies Capital was the lead investor in Zscalers first 2012 round the company went public in March. MongoDB went public in October 2017.

“Since coming out of stealth at Dell EMC World last year, we’ve had a very busy, and very successful, year,” said Scott Darling, president of Dell Technologies Capital. “We are delighted with our continued strong performance and the market reception to the Docusign, MongoDB and Zscaler IPOs. The real value we bring to Dell Technologies and our startup portfolio companies is through our joint work, which allows us to deliver best-of-breed solutions for our customers faster, especially in emerging tech areas.”

The unit has an average investment run rate of $100 million.

The Dell Technologies World event is running until May 2nd. The event brings together customers, partners and Dell’s experts to look at their digital future.

This year’s theme is “Make it real”, concentrating on the digital transformation that companies are going through.

“Every industry is being disrupted in one way or another,” said Stella Low, senior vice president of global communications with Dell. “Nearly 60 per cent of business leaders say they are struggling keep up.”

It’s the company’s biggest show to date, with more than 14,00 attendees from 129 countries. Almost 4,000 people are attending the dedicated partner summit running alongside the event.

1 Google tells workers to return to country where they are employed
2 Sean Quinn stunned at rebranding of Quinn Industrial Holdings
3 Probate is changing: What does that mean for you?
4 Google ups bid to clinch approval for $2.1bn Fitbit takeover
5 Will tracker mortgage be at risk if Ulster Bank closes?
Real news has value SUBSCRIBE