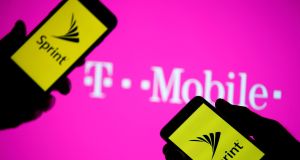 T-Mobile US has agreed to acquire Sprint for $26.5 billion (€21.5 billion) in stock, a wager that the carriers can team up to build a next-generation wireless network and get a jump on industry leaders Verizon Communications and AT&T.

The deal follows years of will-they-won’t-they deliberations between Deutsche Telekom, the German company that controls T-Mobile, and SoftBank Group, the Japanese owner of Sprint, and comes about five months after an earlier merger attempt collapsed.

The combination reduces the US wireless industry to three major competitors from four, ensuring heavy scrutiny from regulators.

“’We are going to have an impact on America,” John Legere, the T-Mobile boss who will serve as chief executive officer of the combined entity, said on a conference call Sunday. Rivals such as Verizon, AT&T and Comcast will have to respond, he said. “We are going to drag the rest of the players kicking and screaming to the prize, which is American leadership” in fifth-generation wireless networks.

The combination values each Sprint share at 0.10256 of a T-Mobile share, the companies said in a statement Sunday, or about $6.62 a share based on T-Mobile’s Friday closing price of $64.52. The ratio was originally fixed based on T-Mobile’s share price at the close on April 9th, before news of the renewed talks emerged, and would have valued Sprint at $6.13 a share based on that price, one of the people said. News of the talks sent both companies’ stocks surging, adding to the valuation of the deal. Sprint closed Friday at $6.50 a share.

The implied enterprise value is about $59 billion for Sprint and $146 billion for the combined companies, according to the statement.

Under terms of the deal, Deutsche Telekom will end up with a 42 percent ownership stake while SoftBank will have 27 percent. T-Mobile’s Mike Sievert will be president and chief operating officer. The German company’s chairman, Tim Hoettges, will serve in that role at the combined company, and the board will include SoftBank Chief Executive Officer Masayoshi Son.

The companies said they expect synergies of about $43 billion based on net present value, with more than $6.5 billion on a run-rate basis, with most of the savings coming from network spending. Combining networks will eliminate future costs to upgrade and operate one of the networks, and by consolidating overlapping properties the new company can vacate unnecessary antenna towers. Neville Ray, T-Mobile’s chief technology officer, said the new company planned to decommission 35,000 cell sites.

Unlike other mergers that achieve cost savings by eliminating duplicate staff, the executives plan to keep dual headquarters in Bellevue, Washington, and Overland Park, Kansas. Sievert said the combined worldwide workforce of about 240,000 employees will increase once the merger is complete. Most of the new jobs will be network related, many in rural areas where network expansion is planned.

The deal marks the third time that SoftBank’s Son has acted on his long-held plan to combine Sprint and T-Mobile. Previous negotiations broke down after the two sides couldn’t agree on how to structure control of the combined entity, people familiar with the matter said at the time.

The two carriers have complementary wireless spectrum that may be a strategic advantage as the companies build a faster fifth generation or 5G network. T-Mobile controls a large portfolio of lower-band airwaves that can travel long distances and pass through walls and windows. Sprint has the largest U.S. holding of higher-band, 2.5 gigahertz spectrum that can handle more data capacity but over limited distances.

The transaction would be “good for consumers, good for the economy, good for the country,” Sprint chief executive Marcelo Claure said on the conference call Sunday. Claure will serve as a board member of the combined company.

The companies dashed a previous plan to merge in 2014 after meeting resistance in Washington. Regulators said that a four-competitor wireless market fosters more choice, price competition and innovation, which proved to be largely true.

Consumers will be the losers if T-Mobile and Sprint are allowed to merge, said Gigi Sohn, a fellow at the Open Society Foundations and former aide for the Federal Communications Commission. “Both companies have been feisty competitors to the two biggest national mobile wireless carriers, Verizon and AT&T” and a combination will lead to less choice for consumers, Sohn said.

Sprint and T-Mobile will try to convince regulators and possibly President Donald Trump that the combination will lead to bigger investments in 5G networks and put pressure on larger rivals, even though consumer benefits aren’t obvious and heavy job cuts are expected. The Trump administration is currently trying to stop AT&T’s $85 billion takeover Time Warner, saying the deal will lead to higher pay-TV prices.

“Like other companies, T-Mobile and Sprint are confident the merger will be approved and they are special and shouldn’t be judged like other mergers,” said Roger Entner, an analyst with Recon Analytics LLC. He’s skeptical that jobs won’t be cut, saying that “those kinds of synergies don’t happen without layoffs.”

Brian Hart, a spokesman for the FCC, declined to comment.