Google is at the head of ‘surveillance capital’, harvesting our data and monetising it 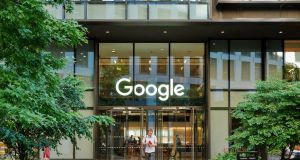 Google may have hit its Cambridge Analytica moment with the shock exposure of Project Nightingale by an internal whistleblower. Photograph: Ben Quinton/New York Times

Facebook, the most visible social platform of scale, has become the most prominent bullseye at which to aim collective wrath about our growing lack of privacy.

When we get agitated about how our personal data is gathered, used and sold on in ways mostly invisible to us, hidden behind algorithms and snappy “free” services that are in truth efficient data hoovers, it’s Facebook’s blue thumbs-up logo that irritates.

It’s not hard to see why. Most of us are on Facebook. We post and see personal details and photos. We privately message. When we learn that data might have been compromised, or shared inappropriately with third parties, we comprehend the possible implications on an individual scale.

That’s undoubtedly why the public first reacted angrily en masse when the Cambridge Analytica/Facebook data scandal came to light, despite years of evidence of secretive grubby data-grabbing and handling across so many of the big tech companies. We could instantly get what was at stake with Facebook.

So it was not surprising to me that in the Seanad two weeks ago, seated before a panel of platform executives, the global parliamentarians on the Grand International Committee on Disinformation directed more than 90 per cent of their questions to Facebook, while Google/YouTube and Twitter cooled their heels.

And when a protester stood outside the Dáil on the day of the meeting, the person wore Facebook blue and an instantly recognisable giant papier mache Mark Zuckerberg head. All of us know what Facebook’s chief executive looks like – not so much Google’s Larry Page or Sergey Brin, or Twitter’s Jack Dorsey. A Dorsey protest mask? Confused passersby would have assumed the protest was over some issue affecting millennial males with beards.

Yet in the bubbling cauldron of companies eager to take your data and monetise you, the largest and most insidious is Google, the chief architect of what Harvard emeritus professor of business Shoshana Zuboff calls “surveillance capitalism” (also the title of her expansive, important book exposing this secretive economy).

Last summer she wrote: “This economic logic was first invented at Google in the context of online targeted ads where the ‘clickthrough rate’ was the first globally successful prediction product, and targeted ad markets were the first markets to specialise in human futures. During the first years of discovery and invention from 2000 to 2004, Google’s revenues increased by 3,590 per cent. Right from the start it was understood that the only way to protect these revenues was to hide the operations that produce them, keeping ‘users’ in the dark with practices designed to be undetectable and indecipherable.”

She gives numerous examples in her book of how Google simply took without asking. As she said in a January interview: “Once we searched Google, but now Google searches us. Once we thought of digital services as free, but now surveillance capitalists think of us as free.”

But perhaps Google, which presents itself as innovative and friendly (the colourful logo! The cutesy Android icon!) has hit its Cambridge Analytica moment now with the shock exposure of Project Nightingale by an internal whistleblower. This joint effort between Google and Ascension, one of the largest healthcare providers in the US, involves the transfer to Google of the private health records of 50 million Americans, including names, addresses and health histories. The non-anonymised records can be accessed by Google staff, the whistleblower says.

Keep in mind Alphabet also has its fingers in genomic research and thus has the potential to link those 50 million with many hundreds of millions of others, because a single individual’s genome exposes even distant family links.

Right on cue comes a new Pew Research report that reveals eight out of 10 Americans believe they are being endlessly tracked and monitored by companies and have little control over such activities. They believe “their personal data is less secure now, that data collection poses more risks than benefits, and believe it is not possible to go through daily life without being tracked”.

These companies are too secretive, too large, too greedy, too indifferent, and too likely to do everything they can get away with

Be grateful for the EU’s General Data Protection Regulation, which would not allow such a secretive, non-anonymised data transfer (though, truthfully, “anonymisation” is a misleading solace, as researchers have shown anonymous data can be linked to a known individual with a little sleuthing).

The US, incredibly, still has no overarching national data protection law. As Congress finally begins to consider proposals, I suspect that’s about to change.

But all our laws, all across the world, including GDPR and the EU’s Privacy Shield, are still not enough. These companies are too secretive, too large, too greedy, too indifferent, and too likely to do everything they can get away with in the grey corners current laws do not adequately address.

1 ‘I don’t need to do any of this. . .I don’t actually need to work.’
2 Direct sea routes to Europe offer certainty in choppy Brexit waters
3 There was no vaccine for Anglo: Why the last crisis was different
4 A tale of two pandemics for Smurfit Kappa and Greencore
5 Anti-alcohol zeal of public health experts peppers reopening debate
Real news has value SUBSCRIBE