With new offers from Apple and Disney, it’s worth shopping around for the best deal 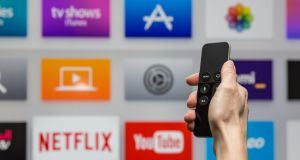 A growing number of customers are turning away from traditional pay-TV providers and looking exclusively at streaming services. Photograph: iStock

When was the last time you watched a TV show when it aired on a scheduled TV channel? While linear TV isn’t in danger of dying off, the popularity of streaming services is forcing a change in how the traditional TV providers are working. From bundled deals with streaming services to online catch-ups and apps, TV companies are having to embrace this brave new world, much like the music industry before it.

Both Sky and Virgin Media now feature Netflix, offering the streaming service on their set-top boxes to customers. It seems the old saying “if you can’t beat them, join them” may hold some meaning here.

However, there is a growing number of customers turning away from traditional pay-TV providers and looking exclusively at streaming services. That is particularly pronounced among younger viewers. According to a report commissioned by the broadcasting regulator, young people are abandoning TV in favour of video-on-demand services at a faster pace than previously anticipated. A 2017 report from consultants Mediatique forecast 15 to 24-year-olds would consume a daily average of 95 minutes of television in 2018; in fact, that figure was much lower at 70 minutes, less than what the consultants expected to see in 2022.

The situation is only likely to get worse, given that further competition is coming in the next few months. With Disney set to launch its Disney Plus streaming service in Ireland – it launched in the US, Canada and the Netherlands on November 12th – and Apple TV+ newly available, the battle for subscribers is set to intensify.

The caveat: you need access to decent high-speed internet to watch most of these services with the minimum of frustration. That may be a problem if you are in a rural area of the country, although the rollout of 5G services may help to ease this in some areas of the country.

So what’s on offer?

Cost: From €7.99 for standard definition plan, limited to one device watching at the same time

When it comes to streaming TV services, the one name everyone jumps to is Netflix. The company has poured a lot of cash into content, investing billions of dollars in its original series and buying up the rights to show others, and the investment has paid off. It has several hits on its hands, including Orange is the New Black, House of Cards and Stranger Things, and taken on series such as Black Mirror. That’s in addition to the syndicated content Netflix has picked up elsewhere, and the back catalogue of older movies and TV shows. The net result? It has signed up more than €158 million subscribers.

Netflix has had its own hiccups. A steady series of price hikes over the past few years has seen some users hit back against the platform, with one US based customer even taking it to court. And even though it has an impressive number of subscribers, it was still short of its own projections.

Still, when it comes to its place in the market, Netflix has first-mover advantage. Will it be enough to resist the juggernaut that is Disney? Time will tell.

Cost: €4.99 per month, with up to six family members sharing through Family Sharing.

When Apple took the wrapping off its TV+ service at a special event in March, people took note. The company may not always be the first to market, but if it can replicate some of its past successes, TV+ may soon be a permanent fixture in the company’s line-up.

Irish viewers have a choice of a few shows currently available on Apple TV+, from Jason Momoa in post apocalyptic TV show See; Jennifer Aniston and Reese Witherspoon in The Morning Show; the space-race themed For All Mankind; and Dickinson, which is a black comedy based on Emily Dickinson’s life. There’s more in the works, with everyone from Oprah to Steven Spielberg signed up to produce content.

Apple’s approach is the same as what worked for Apple Music: a free trial period, and after that, subscription only. Buy an Apple device and you get a year’s subscription included; just enough time for you to get used to having it, and, more importantly, for the content to build.

Amazon has some decent exclusives, such as The Marvellous Mrs Maisel – due for its third season in the coming weeks – and the Man in the High Castle, while Julia Roberts signed on to do a TV version of the podcast Homecoming.

There isn’t quite the breadth of content you’ll get on Netflix or other services, but then it’s not as expensive either. Plus there are some box sets you can binge on, like The Good Fight or Grey’s Anatomy.

Like the other streaming services, you can watch it on a variety of devices, from your smartphone or tablet to your games consoles and smart TVs.

Want to get access to Sky channels without having a lengthy, expensive contract or a dish on the front of your house? Now TV offers an easier way to get what you want to watch without signing up for expensive subscriptions.

Available through a mobile app, a Roku streaming stick that connects directly to your TV, LG smart TVs, your PC’s browser and games consoles, Now TV pretty much goes everywhere you do (within reason).

You sign up for passes – usually a month long – and can cancel them at any time. There’s a kids’ pass for €7 a month that adds some child-focused channels to your package. The basic entertainment package will set you back €15 a month, although you can add Sky movie channels for €15 to bolster it.

Sports costs €39 a month, €15 a week or €10 for a day pass if there’s an event you really want to see but don’t have any use for the subscription for the rest of the year.

When you cancel a pass, Now TV makes very sure you really want to cancel, before dangling a discounted offer to keep you signed up. It can cut the cost of keeping up those monthly passes significantly.

Cost: €5.99 per month, up to five devices simultaneously

If the lure of 350 episodes of Keeping Up With the Kardashians isn’t enough to lure you to Hayu, there are plenty of other reality TV offerings. The Real Housewives of Beverly Hills, various iterations of Top Chef and old seasons of The Hills are all on offer, alongside home renovation shows, cooking competitions and fashion and beauty shows such as the Rachel Zoe Project.

Hayu is also available on Now TV, so if you are signed up with the Sky TV streaming service, you can sign up for monthly subscription through the Now TV app.

If you have visited YouTube recently, there’s a good chance that you might have had an offer of a free trial of YouTube premium. Ad-free access to YouTube is almost worth paying for alone, but the Premium subscription also gives you access to YouTube originals, such as Cobra Kai, Weird City and Origin. There’s also the download option for premium users, and YouTube Music, which you can play in the background while you get on with other things on your phone.

Disney Plus isn’t coming to Ireland until March next year, but the service has already launched in the US and is expected to pose a major challenge to Netflix. There is a list of content confirmed for the platform, including Star Wars series The Mandalorian, which was available from launch, and spin-offs such as Monsters at Work and an Obi-Wan Kenobi series also in the works.

There’s an impressive library covering content from Disney, Pixar, Marvel, Star Wars and National Geographic, with both TV shows and movies on offer. That’s a lot of content in one place, putting up a serious rivalry to Netflix, at a cheaper price.

You can sign up for Disney Plus if you are outside the official launch areas, but you’ll need a billing address from either the US and a reliable VPN. In the meantime, the child-focused Disney Life service is available to satisfy your happy-ever-after cravings.

Eir, meanwhile, has linked up with Apple to deliver its Eir TV service through an Apple TV 4K box. You don’t need an Apple ID to use Eir TV or even set it up as the box will automatically detect the Eir connection and run the set up process; however, having an Apple ID means you can download other TV OS apps such as Netflix, and access Apple TV+.

There are a couple of things to note. The service offers cloud recording, but it won’t work for all channels – BBC, for example, is excluded from recording on the box. And the biggest caveat of all: you need to be an Eir fibre broadband customer. No fibre, no TV service.

Since its launch, Eir has added Amazon Prime to the offering; Eir TV customers will now get the streaming service included with their TV package, while Eir is also offering the service free of charge to Eir’s broadband customers.

Virtual private networks, or VPNs, are a useful thing. Not only can they help shield your browsing data from advertisers and marketers, they can also make you appear to be in a completely different location. That can be handy when trying to access your streaming services outside of your home area; equally, it can open up new content if your chosen streaming service uses geoblocks to restrict films and TV shows in different countries.

Some services such as Netflix try to prevent the use of such services, but some still work. Express VPN and Nord VPN are among the more popular.