Rollout to 542,000 homes will transform telecoms landscape, but at a high price 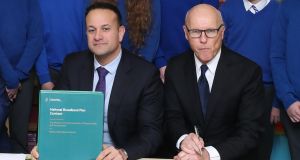 Did the Government have to spend €3 billion on rural broadband, a price tag that works out at roughly €6,000 per household? And, having agreed to spend this monster sum, should it not own the network after the contract concludes? These are questions that will hang over the Government’s flagship communications policy, perhaps indefinitely.

That said, if the scheme delivers on its stated objectives of bringing fibre broadband to 542,000 homes located in the most broadband-deprived areas, it will transform the country.

When combined with commercial fibre rollouts, the National Broadband Plan (NBP) could see up to 90 per cent of the State’s two million homes and businesses equipped with the gold standard of internet connectivity, fibre-to-the-home (FTTH) broadband, within the next five years, catapulting Ireland from broadband laggard into high-tech hub along the lines of Singapore.

Hard to believe, but so-called broadband black spots cover an incredible 90 per cent of the Republic’s land mass. This has resulted in a digital divide and a two-tier economy, which the Government has repeatedly pledged to address.

The NBP’s predecessor, begun in 2009, delivered a basic download speed of 1.2 megabits per second (mbps) to 250,000 homes and was obsolete even before it was completed.

This time around, the Government has opted for a Rolls-Royce solution to future-proof it against obsolescence, namely a high-spec fibre network, and through the most complex tapestry of housing anywhere in Europe.

Even in the most rural parts of the continent, inhabitants tend to live in small villages or hamlets. Not so in Ireland, where a legacy of one-off housing and controversial planning has resulted in a rural sprawl like no other. That’s one reason why the cost is so high. Another is the Government’s botched procurement process, which resulted in just one bid from one firm and the Government effectively over a barrel on price.

The Government dished out more than €25 million in consultancy fees, with the largest chunk – over €11 million – going to KPMG, which advised it to choose a gap-funded model, with the winning bidder retaining ownership of the new network.

Such a model, the consultancy said, would lead bidders to place a high “strategic value” on securing the contract, which would trigger a more competitive process and drive down the required State subsidy in the process.

The exact opposite occurred. The industry here shunned the process, and we were left with one bidder and a price tag which turned out to be six times the original estimate.

Instead of turning back like many other governments in other countries faced with similar issues, ours has decided to press on – even against the advice of its own civil servants – fearful of the political backlash a U-turn at this late stage might trigger, and perhaps with an eye on an election next year.

Many will link the country’s broadband woes to the privatisation of Eir’s predecessor, Telecom Éireann, in the late 1990s. To be fair to the government of the day, it was just following the prevailing ideology of the time: private sector good, public sector bad.

But instead of bringing private sector efficiency, Eircom and then Eir was tossed back and forth by private sector interests, landed with mountains of debt and drained of resources when the industry was going through the most transformative process in over a century, namely the shift to digitalisation.

And that’s why we’re having a major State intervention in the most unprofitable part of the network.

But will the Government’s broadband cure work? This will come down to whether National Broadband Ireland (NBI), the vehicle set up by US businessman David McCourt to deliver the project, can execute.

In its favour, it has been working feverishly since it was named as preferred bidder in May, signing seven key subcontracts with companies such as 4Site, which will design the network, Nokia, which will supply the telecoms equipment, and KN Group, Kelly Group and Denis O’Brien’s Actavo, which will lay up to 140,000km of fibre.

NBI will also have to set up and manage a wholesale platform capable of accepting orders and integrating retailers and eircodes as they come on board.

From a standing start, this a big undertaking, fraught with logistical headaches, and adds another layer onto Ireland’s increasingly complex telecommunications landscape.

1 Oxford Covid vaccine trials offer hope for elderly
2 Hurrah for the companies giving staff more time off
3 Ulster Bank to introduce new card payment controls on app
4 How much state pension will I get next year?
5 Sustainable investment: How your pension can help tackle climate change
Real news has value SUBSCRIBE