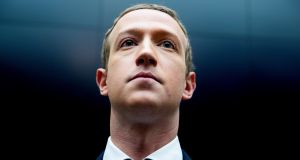 Facebook CEO Mark Zuckerberg needs to stop disguising a defence of revenue streams as a defence of democracy rather than the serious threat to it that Facebook is. Photograph: Michael Reynolds/EPA

For the man-child who runs Facebook, it’s been another few weeks of starring in his own special theatre of the absurd. Under questioning in a variety of settings, from media interviews to Congress, Mark Zuckerberg offered performances that suggest we are right to be worried about this man’s, and this company’s, barely-checked power.

This is an adult who told an interviewer at US network NBC last week that “Part of growing up for me has just been realising that it is more important to be understood than it is to be liked.”

Such introspection would be laudable and less comically absurd if the person making the statement was, say, a determined teenager intent on focusing global attention on climate destruction, rather than a petulant man in his mid-30s, secretively operating a lucrative company.

Going on one recent soul-withering Zuck moment – his tightly-managed speech on “free expression” to law students at Georgetown University, which absurdly, only allowed pre-screened questions afterwards – the “important to be understood” was certainly up for grabs.

In a disjointed talk that New York Times opinion writer Kara Swisher referred to as “a word salad of a speech”, Zuckerberg was still acting as if it was more important for him, and Facebook, to be liked rather than understood.

He revised Facebook’s origins, presenting Facebook as a staunch defender of freedom of expression on current events from the get-go.

“I remember feeling that, if more people had a voice to share their experiences, maybe things would have gone differently” in the Iraq war at the time, he absurdly declared.

Zuck’s own student-era emails suggest Facebook was, rather, a big data-gathering exercise from the “dumb f**ks” who trusted him, even as he offered their data without their consent: “Just ask. I have over 4,000 emails, pictures, addresses . . .”

Reading that, one would be thankful for any later maturing, no matter how slow. But self-growth should involve greater insight. Being “understood” only matters when you have something meaningful to communicate. And what we’re getting is still a word and thought salad that obscures more than it illuminates.

Facebook has no obligation to adhere to any current laws, anywhere, on 'freedom of expression'

For example, there’s Facebook’s recent decision to allow politicians to lie in advertisements, also defended in the speech. You’d think that people running for representative office should be held to the same, if not higher standard than other Facebook advertisers, who aren’t allowed to lie.

But no: in confounding logic, it’s up to the rest of us to spot the lies because, as Zuck told the students, we have a “right” to hear the lies, and judge for ourselves.

This is exactly the approach that has not worked out very well for democracy so far. By contrast, Twitter yesterday made the right decision, to ban all political candidate and issue ads, starting in November.

Facebook’s business model is largely based on targeted ads, which means only selected, generally politically like-minded recipients see them. So, by contrast to ads run on radio, television or in print, it’s difficult for anyone outside a receptive circle to recognise a lie and call out an ad.

The absurdity of the “let ‘em lie” approach was swiftly challenged by US presidential candidate Elizabeth Warren, who took out Facebook ads that lied about Zuckerberg; then, vigorously, by Congressional representative Alexandria Ocasio-Cortez, who grilled a largely lost-for-answers Zuckerberg about how far a politician might push this corporate-approved falsehood dispensation; and then by a Californian who registered to run for office with the sole purpose of . . . lying in ads.

Questioned, Zuck and Facebook wobbled on where lines would be drawn.

Meanwhile, Facebook loftily launched a News Tab feature, intended to gather and promote trustworthy news stories. But amongst those trusted news sources was Breitbart, the extremist far-right website. Zuck and senior minions said this was a sterling example of Facebook supporting free expression. Expect otherwise, and we were asking to live in censor-happy China.

Adam Mosseri, chief executive of Facebook-owned Instagram, tweeted: “I’m not defending Breitbart, I’m asking if you really want a platform of our scale to make decisions to exclude news organisations based on their ideology? Put another way, do you care more about advancing your views than preserving freedom for diverse views to be on platforms?”

As responsible online advertising advocacy group Sleeping Giants tweeted back: “This speech argument goes out the window when you start talking about specifically culled ‘trusted’ news sources. It also ceases to be relevant because @facebook is an advertising and data mining company, not a government entity.”

Facebook has no obligation to adhere to any current laws, anywhere, on “freedom of expression”. Its attempt to grandstand on this issue obscures the steadily-growing income streams from political advertising and the fact that extremist, clickbait content drives shares, readership and hence, engagement with the platform and revenue.

Zuck doesn’t need to be “understood”. As CEO of the world’s dominant social media platform, he needs to grow up, learn about corporate responsibilities, and stop disguising a defence of revenue streams as a defence of democracy rather than the serious threat to it that Facebook is.