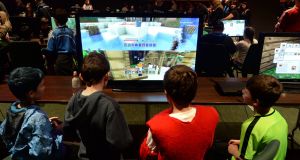 GamerCon may have intended to emulate some of the best games events in the US when organisers first came up the idea to stage it in Dublin, but angry ticket holders took to social media over the weekend to criticise the event after being left outside for hours on Saturday.

Organisers blamed health and safety restrictions for the chaos at the inaugural GamerCon convention, with families stranded outside in wind and rain after being told the venue was currently full.

The gaming convention, which promised access to YouTube stars, sneak previews of games and several eSports tournaments, was being held at the Convention Centre in Dublin.

The organisers of the two-day event had expected 20,000 attendees over the weekend. However, with the Convention Centre offering a maximum capacity of less than half of that for each day, achieving the target was dependent on attendees staying for only part of the day.

Although organiser Ferdi Roberts, founder of GamerCon, issued a statement on Saturday apologising to disappointed games fans for the fiasco, he was unavailable to comment on Sunday.

“GamerCon sincerely apologises for the significant delays that our attendees experienced this morning,” he said in Saturday’s statement. “As a first-time event we underestimated the traffic flow that we forecast for the event and have very strict health and safety-related capacities which we must adhere to.

“That temporarily impacted our ability to process the queue which resulted in longer-than-expected wait time for our attendees.”

Although the queues were shorter on Sunday outside the event, there were still lengthy queues inside for some of the YouTube stars at the event, with Ali-A attracting a particularly keen following.

GamerCon offered refunds to disappointed games fans who failed to gain access, which included children who had hoped to meet the YouTube stars. Terms and conditions for the event included a provision claiming access was not guaranteed if capacities for the venue were in danger of being breached. However, it was not clear when that was inserted into the website, as a cached version of the site from July last year did not contain it.

GamerCon had attracted support from GameStop, which was sponsoring the event, HP, Xbox and PlayStation, among others.

Organisers were pitching the event as a Europe-wide convention, with plans to bring it to London, Berlin and Madrid later in the year.

1 ‘My rent here is so low it’s a joke’
2 ‘Sad day’ for House of Ireland as tourism retailer goes out of business
3 This charming man: how Paschal Donohoe won the Eurogroup presidency
4 Goodbody’s planned €155m sale to Bank of China falls through
5 Pharmaceutical industry signals it won’t extend drugs agreement
Real news has value SUBSCRIBE