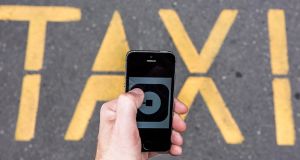 A Paris tribunal for social security matters dismissed a French request for Uber to make social security payments for drivers, according to a December 14th ruling that hasn’t been previously reported. Photograph: Akos Stiller/Bloomberg

High-end taxi hire platform Uber won a court victory to prevent its drivers being classified as employees last December. The case is significant in the firm’s international battle to preserve the business model that has made it the world’s most valuable privately-held technology company.

The Paris tribunal for social security matters dismissed a French request for Uber to make social security payments for drivers, according to a December 14th ruling that hasn’t been previously reported. The court said the recovery procedure was “irregular” because the URSSAF agency, which collects welfare contributions, had not upheld the rights of Uber’s French unit.

While French authorities only sought about €5 million in back dues for January 2012-June 2013, a recovery procedure spanning a longer period of time could have put Uber’s business model in the country at risk. The URSSAF declined to comment other than to say it had appealed the ruling.

San Francisco-based Uber has faced complaints and lawsuits about working conditions around the world over the last year. A UK employment tribunal ruled that Uber should pay drivers the minimum wage and provide holiday pay. Uber also faces a class action lawsuit by California drivers in San Francisco after a federal judge in August rejected a $100 million (€93 million) settlement as inadequate.

In France, authorities said last year that Uber should reclassify drivers as employees and sought corresponding social security contributions from the company. To back their request, the URSSAF said it found evidence of a hierarchical relationship between Uber France and its drivers. The company has previously argued that it isn’t liable as its drivers are independent contractors.

Uber representatives in France declined to comment on the ruling.

The Paris court didn’t rule on whether Uber drivers should be treated as employees. Instead, judges decided to dismiss the case on a technicality, ruling that authorities were obligated to share evidence with Uber that was gathered during hearings involving drivers as the information was used to prove the drivers’ status.

Failure to do so meant Uber France wasn’t in a position to verify whether the drivers actually used the transport app and whether French authorities were right in saying the businesses Uber drivers had set up were mere fronts, according to the ruling.

1 Why gift a son now if it eats into his tax-free inheritance threshold?
2 Can we finally say farewell to the scourge of hot-desking?
3 Dispute over €2.95m sale of Georgian property struck out
4 Big Four told to outline plans for audit split in UK by October
5 Ballymore acquires London shopping centre for €83m
Real news has value SUBSCRIBE