A smart Swatch? Swiss watchmaker gets in on the trend 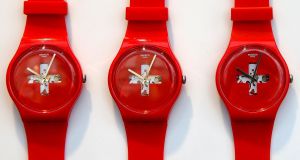 Swatch said it’s developing an alternative to the iOS and Android operating systems for smartwatches as Switzerland’s largest maker of timepieces vies with Silicon Valley for control of consumers’ wrists.(Photograph: Arnd Wiegmann/Reuters)

Swatch said it’s developing an alternative to the iOS and Android operating systems for smartwatches as Switzerland’s largest maker of timepieces vies with Silicon Valley for control of consumers’ wrists.

The company’s Tissot brand will introduce a model around the end of 2018 that uses the Swiss-made system, which will also be able to connect small objects and wearables, Swatch chief executive Nick Hayek said in an interview Thursday. The technology will need less battery power and it will protect data better, he said later at a press conference.

Switzerland’s four-century-old watch industry has been adjusting to new competition since Apple Inc. entered its territory with the Apple Watch in 2015. Hayek faces the uphill challenge of trying to outsmart Google and Apple, which have fended off would-be rivals to their operation systems in smartphones and watches. Hayek’s strategy contrasts with that of LVMH watch chief Jean-Claude Biver, who earlier this week unveiled an upgraded TAG Heuer smartwatch the brand developed with Google and Intel Corp.

Competition from smartwatches has hurt low-end timepieces the most, and Hayek has been adding electronic functions into Swatch’s own less expensive brands such as Tissot and its namesake timepieces. This month, Swatch said it developed the world’s smallest Bluetooth chip for use in watches and household objects.

Swatch’s approach will work better because it’s trying to “think small” as one of the biggest problem for wearable devices is battery drainage, Hayek said, speaking at the Biel, Switzerland headquarters of Omega, another of 18 brands that Swatch produces.

“There’s a possibility for wearables to develop as a consumer product, but you have to miniaturize and have an independent operating system,” the CEO said.

Shares of Swatch rose 1.6 per cent as of 2:20 p.m. in Zurich, giving the company a market value of 19.4 billion francs ($19.5 billion). “I’m not convinced,” said Luca Solca, an analyst at Exane BNP Paribas who follows the luxury industry. “People use smartwatches expecting to use the same apps they have on their mobiles. A proprietary operating system defeats the object.”