No, the illegal Irish in US should not be a ‘special’ case 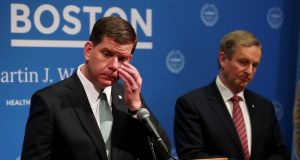 Taoiseach Enda Kenny is using the annual St Patrick’s Day walkabout and shamrock delivery in the US to press for a solution for the approximately 50,000 “undocumented” Irish people in the States.

“Undocumented” is the preferred Irish term. “Illegal immigrants” is generally reserved for those of different skin hue, even though the Irish are as much illegal immigrants in the US as those whom the ludicrous Trump Wall is supposed to keep out.

In Boston at a joint press conference with the Taoiseach this week, Boston mayor Marty Walsh put a welcome public damper on what has been a bit of hypocritical Irish blarney for two decades now.

“I’m a proud son of Irish immigrants, but I would not be supportive of rules and regulations that just benefit people who are undocumented Irish,” Walsh said. “I couldn’t support something that just benefited one country.”

Well done, Mayor Walsh. It was time someone said this publicly to Irish officials during the annual St Paddy’s schmooze fest.

Because Ireland always wants a special deal for Irish illegals (many of whom deliberately overstayed US visas both during Irish economic booms and busts). It’s not as if we were in the middle of, say, an actual famine at these times, as were many other nationalities longing for US green cards.

Yet thanks to Irish-surnamed special friends in the US government over the years, Ireland shamelessly lobbied for, and won, special consideration: a staggering 40 per cent, mega-bonus portion of all US green cards issued in those US visa “lotteries” (remember the Donnellys? The Morrisons?).

Forty per cent, over people from the world’s truly impoverished nations. And, those visa tranches continued into a time when Ireland had entered its Celtic Tiger phase, becoming one of the fastest-growing, highest-income global economies. We began lobbying for more – more! – just a few years ago.

To be sure, plenty of Irish people were locked out of our 1980s-1990s economy. But even so: a lottery – NOT a needs-based assessment – giving 40 per cent of all lottery visas to one country – an EU member state! – over people from a long roster of desperately poor countries with stunted adult life expectancy, high child mortality, recurring famine and disease? Luck o’ the Irish, begob, indeed.

Now, immigrants are the focus of much intense discussion and campaigning in the US and Europe, and an evergreen “fake news” topic.

Here’s a dose of US reality. Studies show immigrants commit far less crime than US citizens. The White House, ridiculously, wants a list of immigrant honour killings in the US, yet half of all women murdered in the US are killed by their US citizen husband or male partner.

Pew Trust research shows second-generation immigrants earn the median US income and match US home ownership rate, surpass (36 to 31 per cent) the number of college graduates per household, and have a lower poverty rate than the US average (11 to 13 per cent).

Immigrant children outperform US children in critical areas such as science. Forbes just noted that 83 per cent of finalists in the 2016 Intel Science Talent Search were children of immigrants. Says Forbes, some 75 per cent “had parents who worked in America on H-1B visas and later became green card holders and US citizens.”

(As an aside, we have seen similar developments here, with immigrant children taking many of the annual awards, including the top prize, for years now in our BT Young Scientist and Technologist Exhibition.)

Immigrants also contribute disproportionately to economic growth and success in the US. Over half (51 per cent) of US companies valued over $1 billion were started by immigrants. Research by US-based entrepreneur and academic Vivek Wadhwa found “between 1995 and 2005, foreign-born innovators founded 52.4 per cent of technology companies in Silicon Valley and 25.3 per cent nationwide”. He notes that this is now reversing, mirroring a huge US backlog and sluggishness in processing H-1B work visas into green cards. The real US example (and that big hint from the Young Scientist competition) suggests we would be well advised morally, economically, socially, and culturally to think as much about immigrants within Ireland, as we do about Irish illegals/undocumenteds in the US. Especially as Ireland is being offered true opportunity now to welcome those alienated by a Brexit UK and Trump US.

Instead, we make working here difficult, still. We hardly acknowledge our existing immigrant communities (read: the non-white communities) who also remain practically invisible in Irish media or advertising. And, most shameful of all, we have kept immigrant men, women and children isolated, contained, and unemployed in stultifying detention – oops, “direct provision” – centres for years on end.

A special deal for 50,000 Irish illegals in the US? Taoiseach, we need to clean up our own act and attitudes first. And, along the way, reach firmly towards the better future for all that a more open, immigrant-friendly Ireland would provide.

1 ‘No demand... because there are no people’ at well-known Dublin pub
2 Nearly 30,000 could lose pandemic payment if they do not confirm eligibility
3 Dublin-based AR tech company Antikytera secures investment
4 Bank of Ireland does U-turn after refusal to reimburse ‘smishing’ victims
5 UK criticised for ‘unforced errors’ on post-Brexit trade deals
Real news has value SUBSCRIBE