Spotify nears licensing deals which may pave way to IPO 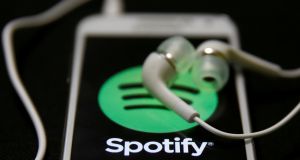 Spotify: may restrict the biggest album releases to its paid tier for a period of time. Photograph: Dado Ruvic

Spotify is closing in on licensing deals with the world’s largest record labels, hoping to clear a hurdle in the streaming music company’s path towards an initial public offering (IPO) after months of tough negotiations.

As part of the proposed deals the music companies have agreed to trim the royalty fees that Spotify pays for their songs, according to people familiar with the discussions.

In exchange Spotify would restrict the biggest album releases to its paid tier for a period of time – a substantial concession after years of friction with pop stars including Taylor Swift, who pulled her music from the platform in 2014. Recorded music companies, and the likes of Swift, want to limit Spotify’s free service, which generates far less revenue than paid subscriptions.

People close to the matter say licensing talks have picked up considerably and deals could be inked within weeks after months of gridlock, with the caveat that nothing has been signed and talks could again stall.

The long-term licensing deals would boost Spotify’s appeal before an IPO as it looks to convince investors it can translate its fast customer growth into a solid business. Spotify was valued at $8.5 billion (€7.9bn) in a recent funding round.

The “big three”, which together control the vast majority of the world’s popular music, also hold minority stakes in Spotify, and have an interest in a public offering succeeding, label executives say.

This month Spotify said it had reached a milestone of 50 million paying customers, underscoring the music industry’s dependence on the streaming pioneer as it navigates a digital future.

Spotify enjoyed a growth spurt in the past year, adding 20 million paying subscribers, while its main rival, Apple Music, has so far signed up only 20 million paying customers. Spotify’s growth has helped revive the music industry as streaming last year powered the fastest revenue growth for recorded music since the file-sharing days of Napster.

However, Daniel Ek, Spotify’s founder, has steadily defended his “freemium” streaming model as the path forward for music in the digital era, even in the face of a high-profile critique from Swift, who said she was “not willing to contribute my life’s work to an experiment”.

Mr Ek has argued that offering music for free lures in new listeners who later sign up to pay. – Copyright The Financial Times Limited 2017