Adobe’s Irish subsidiary to pay $3.2bn dividend to its parent 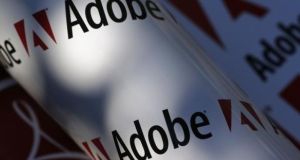 The declaration comes shortly after the Irish unit declared a €2 billion dividend on the back of its last financial accounts, of which $1.5 billion has been paid

An Irish-based subsidiary of the software giant Adobe plans to pay an interim dividend of $3.2 billion (€2.7 billion) to its US parent this year.

Directors of Adobe Software Trading Company Limited, which is based in Citywest, Dublin but domiciled in Bermuda, agreed the dividend in March with a plan to pay it before the end of November, “subject to sufficient profits being available for distribution”.

The declaration comes after the company declared a €2 billion dividend on the back of its last financial accounts, of which $1.5 billion (€1.28 billion) has been paid.

The repatriation follows the tax reform package introduced under US president Donald Trump, which included a one-time special rate of 15.5 per cent on the repatriation to the US of profits earned abroad.

The reforms also saw the US corporate tax rate cut from 35 per cent to 21 per cent.

Adobe did not make any reference to the US incentive to repatriate profits in its accounts.

Kevin Hassett, chairman of the White House Council of Economic Advisers, who was in Dublin last week, insisted that changes to the US corporate tax code would not result in an exodus of investments by multinationals located in Ireland.

Afilias, a Dublin-based company that manages internet addresses, recently relocated its headquarters to Pennsylvania on the back of the tax changes. The fear is that others will follow.

Adobe Software Trading Company, which employs more than 3,000 people and has net assets of $4.3 billion (€3.6 billion), recorded revenues of $3.2 billion (€2.7 billion) last year, up 26 per cent from $2.5 billion (€2.1 billion) in 2016. It attributed the rise in turnover to increased subscription revenues from the company’s Creative Cloud and Marketing Cloud products.

The rise in turnover significantly boosted profits, which jumped from $492 million (€421 million) to $1.04 billion (€890 million). As a percentage of revenue, the operating margin was 31 per cent, increasing from 19 per cent in 2016, the company said.

Adobe Software Trading Company Limited carries out research and development activities as well as licensing, production and distribution of software.

Founded in 1982 and with headquarters in San Jose, California, the company’s parent, Adobe Systems Inclusive, makes digital software products that include Photoshop, Acrobat, Dreamweaver and Illustrator.

A second Irish subsidiary, Adobe Systems Software Ireland Limited, which offers a line of digital media products and services, reported a 27.7 per cent rise in turnover for the same period, as revenues rose from $2.3 billion (€1.97 billion) to $2.97 billion (€2.54 billion).

The company, which is domiciled in the Republic of Ireland, employed 156 people with staff costs totalling $16 million (€13.7 million), up from $12 million (€10.2 million) a year earlier.

Adobe has been contacted for comment but has not yet responded.