Dublin staff given choice to accept redundancy or move jobs to Cork, Limerick or Sligo 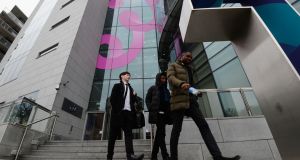 Eir this month announced it is taking back in-house about 950 roles from HCL Technologies, the Indian call centre company that runs the contract.

About 1,000 staff at the outsourcing company that operates Eir’s customer call centre are to ballot for industrial action over “derisory” redundancy packages that have been offered to 650 Dublin-based staff.

The Dublin staff have been given the choice to accept redundancy or relocate to jobs in Cork, Limerick or Sligo.

Eir this month announced it is taking back in-house 950 roles from HCL Technologies, the Indian call centre company that runs the contract. Eir and HCL have been in discussions for months over concerns that Eir customers were receiving poor service via the call centre.

It is proposed that the Dublin call centre be shut, and staff relocated to work for Eir’s other facilities.

HCL this week arranged meetings with unions and staff in Telephone House, the city centre building where the majority of staff manning the Eir call centre is based.

It offered them a redundancy package believed to be about two weeks’ pay per year of service for most workers, sparking anger among those who are unwilling or unable to move to Cork, Limerick or Sligo to work for Eir.

It is understood that HCL’s redundancy offer to staff varies across three separate categories of worker.

HCL staff on the Eir contract who have transferred to it from other companies, including Eir’s old supplier and Eir itself, are being offered two weeks’ pay per year, plus one bonus week and pay in lieu of notice.

Staff recruited directly by HCL will get the two weeks’ per year plus the bonus week, and a further two weeks’ flat pay.

Close to 200 people employed at HCL for less than two years, and so have no legal redundancy entitlement, are to get a flat two weeks’ pay.

The Communications Workers Union (CWU) denounced the proposed redundancy packages, and threatened strike action at HCL. A ballot is planned to take place towards the end of this week.

“Our national executive council pre-emptively authorised the union to conduct a ballot of members in circumstances where redundancy proposals tabled by the company adversely impacted the interests of workers at the company,” said Steve Fitzpatrick, general secretary of the CWU.

“Yesterday, HCL management presented redundancy packages for up to 650 workers at the company that are impacted by the announcements last week from HCL and Eir. The packages are derisory and unacceptable. We are now proceeding to ballot for industrial action at HCL, up to and including strike.”

HCL responded, saying that it appreciates the contribution made by its staff. It also said it remains “fully committed to ensuring our employees are well supported during the transition of services”, as it insources the roles.

The transition of the call centre operation back in-house to Eir is expected to take up to six months.

“The wellbeing of our employees is paramount, and we are going over and above the minimum requirement to ensure they are well supported,” said HCL.

1 Admission of mistake in Oxford vaccine dose raises doubts over reliability
2 Cliff Taylor: Deal or no deal we are now heading for a hard Brexit
3 Move to EU or face disruption, City of London is warned
4 Fiona Reddan: Who’s afraid of Revolut? Not AIB and BOI it seems
5 Last orders for Rí-Rá and Globe as Central Hotel gets green light to expand
Real news has value SUBSCRIBE