Machines to do ‘more than half’ of workplace tasks by 2025 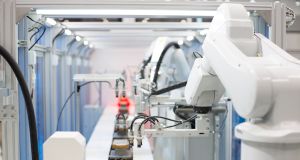 The WEF report authors said workers would require new sets of skills as the division of labour between humans and machines continued to evolve.

More than half of all workplace tasks that exist today will be performed by machine by the year 2025, according to a new forecast from the World Economic Forum (WEF).

The forum said the disruption associated with increased automation will bring “significant shifts in the quality, location, format and permanency of roles”. However, despite the widespread disruption, the robot revolution could have a positive impact on employment, it says, with 133 million jobs being created in place of a predicted 75 million that will be displaced.

According to the forum’s The Future of Jobs study, 29 per cent of workplace tasks are currently performed by machines. This is expected to dramatically change over the next few years.

Close to half of all companies surveyed by the forum said they expected their full-time workforce to shrink by 2022 as a result of automation. But more than a quarter said they thought it would lead to new roles being created.

“Businesses are set to expand their use of contractors doing task-specialised work, engage workers in more flexible arrangements, utilise remote staffing and modify the locations where their organisation operates to ensure access to talent,” the report authors said.

The authors said workers would require new sets of skills as the division of labour between humans and machines continues to evolve.

“All industries expect to have sizeable skills gaps, with average skills’ instability of 42 per cent, highlighting the scale of the challenge in preparing today’s workers for changes within their current roles and the emerging jobs of the future,” they said.

The forum has also published its annual list of the top emerging scientific breakthroughs with the greatest potential to change the world in the next three to five years.

The purpose of the list is to draw attention to the fact that many technologies that once would have belonged firmly in the realm of science fiction are now on the cusp of entering everyday usage.

Among this year’s top technologies are materials for fighting cancer that could one day be used to make invisibility cloaks, lab-grown meat and argumentative robots.