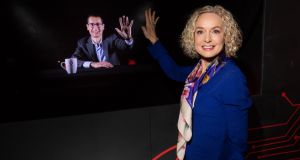 Vodafone Ireland has launched the country’s first live 5G network site, although it will be some time before most of us can benefit from it.

The new site has opened for trials in Dublin’s docklands with Vodafone planning to use it to test 5G hardware, software and services ahead of a wider rollout of the mobile technology.

The company on Wednesday showcased the much-hyped technology with what is believed to be the first Irish international holographic call made between Vodafone Ireland chief executive Anne O’Leary, who was in Dublin, and the company’s interim chief technology officer Max Gasparroni, who was in Germany.

Vodafone and Ericsson, which is supplying the hardware for the new network, also announced a new partnership with University College Dublin’s innovation hub, NovaUCD, to create a new 5G accelerator programme. This initiative will allow participants to test new products and services over the network with candidates who successfully complete the programme being eligible for early-stage investment to help bring their solutions to market.

While long promised, 5G has been a long time coming, with research firm Ovum not expecting it to be commercially available generally until 2020. Vodafone Ireland, which successfully demonstrated the technology at an event in Trinity College Dublin in February, said at that time it expected to roll out 5G within 24 months.

The technology brings faster mobile speeds than existing mobile technology networks, as well as lower latency and increased security and reliability. It also enables multiple devices to be connected in a move that is expected to lead to a sharp rise in the number of Internet of Things devices in circulation.

“We’re really excited about 5G and the benefits it will bring,” said Ms O’Leary.

She said the company was committed to being the first to bring 5G to market in the Republic.

Vodafone has stressed that while 5G is complementary to rural broadband it should not be seen as a replacement for fibre technology.

While the launch of the test site marks a first it will be some time before 5G becomes widely available, not least because there are few, if any, commercial devices on the market.

Nonetheless, Mr Gasparroni said the new site was a significant marker on the journey towards the rollout of the technology.

“5G is a major step change compared to 4G . . . with 4G you can support thousands of sensor devices. With 5G you can support hundreds of thousands, so you can allot use cases such as asset tracking, smart cities and so on,” he said.

Hans Hammar, global programme director of Ericsson, said a mobile wifi router it has developed that enables users to connect their devices to 5G should be commercially available in the first quarter of 2019.

However, he added that many smartphone users will have to get new devices if they don’t want to connect to the technology using mobile wifi routers.

The first 5G devices should begin to hit the market in the second quarter of next year, Mr Hammar said.

Mobile World Congress organiser GSMA has forecast there will be 1.1 billion 5G connections globally by 2025.