Rise of esports in Ireland could yield lucrative careers for gamers 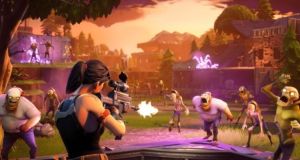 Fortnite: the largest Fortnite tournament in Europe will take place at the Dublin Games Festival this weekend at the RDS

You might have missed the news but, earlier this month, South Korea became World Cup holders for the third time in a row. China took home the second-place medal, with Canada in third. The United Kingdom made it as far as the semi-finals; Ireland didn’t feature in the competition.

Held at Blizzcon in Anaheim, California, the event was the Overwatch World Cup, an esports game that has become massively popular in recent years.

The game is one of several that have made it on to the world stage as competitive esports events multiply. League of Legends, Counterstrike: Global Offensive (CS: GO), Super Smash Bros, StarCraft, Rocket League and Call of Duty all have their own tournaments, and the cash prizes can add up.

For elite players, there can be a considerable pay-off. Dota 2 players dominate the “highest earners” rankings, with the top earner Kuro “KuroKy” Takhasomi notching up more than $4 million and more in total earnings.

Earlier this year, Fortnite creator Epic Games announced it would create a $100 million prize pool for tournaments. With that amount of money up for grabs, it throws the argument that video gamers are time wasters into a new light.

But like more athletic sports, being an elite player requires time, training and skill. In Ireland, the scene is relatively small, but it is growing.

Esports, as mainstream media look at it, only started about three or four years ago with the onset of the G Series events, which was set up by Theo Goyvaerts and Bryan McNamara.

“We set out to do an esports event where you had the players and the audience and that was it,” said Goyvaerts. “The very first event we did was in the Alex hotel, with 10 PCs and 140 people. The second event three months later had over 1,000 people attending and three different tournaments.”

Aeonspark is now working towards establishing Ireland as a European esports hub. “We have many companies in Ireland that have some of the biggest esport leagues – Blizzard, Riot Games. And there is nothing here in Ireland, which is kind of crazy,” said Goyvaerts.

Part of that roadmap is the Dublin Games Festival, which is set to play host to Ireland’s largest esports tournament this weekend, including Overwatch, League of Legends, Rocket League, Super Smash Bros, CS:GO and the largest Fortnite tournament in Europe. About 3,000 people are expected to attend.

Next year, it will be combined with the industry event Aeonspark-organised Dublin Games Summit, to become Dublin Games Week.

With newer games such as Overwatch and Fortnite gaining ground, there are more and more new faces appearing on the scene. The added benefit is that more people are becoming aware of the esports scene in Ireland.

The potential is vast, with everything from first-person shooters in a battle royale-style games to fighting tournaments and sports leagues.

In 2017, esports consultancy and fan engagement firm Sportego announced a Fifa 18 league that linked top players with professional clubs in Ireland, England, Scotland and Wales. Founder Trevor Keane said the interest – and the money – is building.

“It’s now becoming more common in conversation. Sponsors are starting to look at it more, which is very interesting. What you are seeing is the emergence of teams in their own right, competing at a top level,” said Keane. “The Irish interest is building. People are moving out from being hobbyists and starting to see the potential of it.”

Meanwhile, the close-knit community is starting to open up as more events are taking place, and more sponsors are starting to come on board. Last year, Estars began a League of Legends tournament that ended with a final in the 3Arena. Sponsored by mobile phone network Three, the league linked players with Irish football clubs.

The potential for Irish players is huge, as long as they are willing to put in the work. “With the emergence of the likes of Fortnite and Call of Duty doing battle royale-type games, the opportunity is there if they put the effort in,” said Keane. “But it is going to be that elite sport level. Only 2 to 3 per cent of the audience will rise to the top.”

It’s not just about being an elite gamer; esports offer opportunities for people beyond the team. Rob “Gosu Dreams” Price is what is known as a caster, essentially an esports commentator.

It was an accidental move to start with. Although Price says he was interested in games from a young age, it was when he went to college that he really began pursuing the idea. It was sparked by playing StarCraft against friends.

“I went on to YouTube and found a guy who did StarCraft tutorials, breaking down the pro-level play,” he said. “I didn’t even realise there was an esports scene at this stage. I was instantly hooked.”

He made contact with Riot Games with the intention of setting up a league or society in Trinity College. “Looking around, there was a board games group but there wasn’t a dedicated esports one,” he said. It turned out he wasn’t the only one to notice the deficit, with others interested in establishing some sort of esports group in the Dublin institution.

After a few years of playing on the college team, Price took a step back from playing in his final year. It was a decision that has shaped his future career, giving him the chance to get into casting.

“One of the shoutcasters, the commentators, was sick one of the days, so I was asked if I minded filling in,” he said. Price had a knack for the particular type of commentating that esports requires, so he continued.

There are two types of shoutcasters. There’s the play by play, the hype guys. The one you’ll hear during the action moments; and there are the colour casters, the ones who provide context and analysis to the matches. Price provides colour for League of Legends, Overwatch and Fortnite, with play by play for Rocket League.

It has paid off. Price is giving up the day job – a career in banking – to become a shoutcaster full time.

And esports, both in Ireland and globally, look like they are set to get even bigger. The mainstream media is also starting to take note, with some tournaments now televised. More significant could be the fact that Facebook is taking an interest. In January, the social media firm signed a deal with ESL, an esports organiser and production company, that would give the social media firm the exclusive rights to stream CS:GO tournaments. With more than two billion active monthly users, that is a lot of extra eyeballs.

So the next time you are tempted to shout at your teenager about the amount of time they are spending playing Fortnite online, consider this: it may be practice for their future career.

Esports is full of jargon, too much to list here. But here’s an idea of some of the slang and acronyms you might come across:

Casting: Esports commentators. There are two type: play by play, which covers the action as it happens, and colour, which is the analysis side of it.

Ganking: Ambushing another player, usually for the kill.

Nerf: When developers make something in a game weaker to balance things out. That all-powerful weapon you were unbeatable with? The developers nerfed it and now it’s the same as the rest.

NPC: Non-player character. The AI players in the game.

Rekt: Wrecked, dominated, pounded into the ground. It just hasn’t been your day.