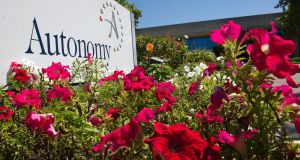 Sushovan Hussain was found guilty in April of orchestrating an accounting fraud to arrive at the $10.3 billion (€9.05 billion) price Hewlett-Packard paid for Autonomy, a UK software-maker, in 2011. As part of his sentencing in San Francisco federal court scheduled for next month, Hussain disclosed his stake, with Mr Lynch, in startup company Darktrace and venture capital firm Invoke Capital.

Hussain sold shares in an entity related to Darktrace to Mr Lynch, and plans to sell him more, for a total of about $4 million to pay legal bills, according to a court filing last week. Based on the apparent value of the holdings, prosecutors estimate Hussain’s stake in Mr Lynch’s businesses may be worth $100 million.

“It would appear that Mr Lynch is paying a ridiculously high dollar value” for shares Hussain sold him, “raising questions” about the purpose of the transactions, prosecutors said in the November 14th filing.

US District Judge Charles Breyer ordered Hussain late on Monday to turn over to prosecutors detailed records of the investments, including transactions involving Mr Lynch, by November 22nd.

Hussain’s lawyer, John Keker, said he planned to ask the court to block the government’s request by November 20th.

Autonomy was the UK’s second-largest software business when Hewlett-Packard acquired it. Hewlett-Packard later wrote down its value by $8.8 billion, citing fraud by Autonomy and asking the US Justice Department to investigate. Prosecutors have identified Mr Lynch as a co-conspirator in the fraud but he has not been charged.

The government argues that Mr Lynch’s reassembling of his inner circle at Autonomy, including Hussain, by itself isn’t illegal but may have created financial relationships that prevented some of them from coming forward as witnesses.

“Where the same circle of participants who defrauded Autonomy’s investors, HP, and HP’s investors are all reliant on the wealthiest of the co-conspirators, the government has legitimate concerns about hush money,” prosecutors said in the filing.

A spokesman for Hewlett Packard Enterprise in London didn’t immediately respond to a request for comment outside normal business hours. HPE was formed in the breakup of Hewlett-Packard Co’s corporate computing divisions from its printer and PC business in 2015. – Bloomberg