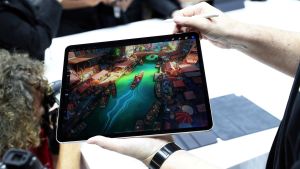 Apple iPad Pro’s display is LCD rather than OLED, but it is bright and sharp, and has 264 pixels per inch. Photograph: Shannon Stapleton/Reuters

What would it take for you to give up your laptop? The idea that tablets would herald the end of the laptop hasn’t really been realised just yet, but Apple thinks the new iPad Pro could be that device.

So what does the third generation of the iPad Pro bring? Amore powerful chip, faster performance and a little aesthetic tweaking, plus a more flexible connection, with prices from €1,129.

It takes some style pointers from the iPhone, resembling the iPhone 5 and 5s with the metal band around the edge, shrinks the bezels and uses some of the iPhone X and Xs technology for security.

The new version of the Pro comes in 10.5 inches and 12.9 inches, so no difference from the last lot in terms of screen size. Overall though, the device has shrunk. That’s because Apple has shrunk the bezels right down, and has got rid of the home button, making it easier to cram more screen into a smaller space. The version reviewed here is the 12.9 inch iPad, but it feels more compact than the last generation, and certainly fits into my bag with less fuss.

The display is LCD rather than the iPhone X’s OLED, but it is bright and sharp, and it has 264 pixels per inch. Basically, whether you are working on documents or tackling video, it all looks great.

With no home button, that means you’re reliant on FaceID or the passcode to unlock your device. FaceID is a bit more of a challenge with the iPad Pro than it is with the phone, mainly because the natural position for holding the iPhone is far more suitable for capturing a facial scan than it is for the iPad Pro. But despite changing the orientation a few times, the iPad Pro continued to accurately recognise my face. In fact, the only trouble I had with it was when the iPad was in portrait mode on my laptop, and my face was just out of view. That was more user error than device flaw.

The biggest change? The lightning port is no more. Thanks to some feedback from iPad Pro users, Apple has decided to ditch its proprietary connection in favour of the standard USB C port that is becoming the norm for every other device. It makes the iPad Pro more flexible, although what you can do with the port is still limited – you can’t just hook up an external drive, for example – but it opens up the possibilities for the future.

If you do a lot of typing, the keyboard cover hasn’t changed much – it still has that keyboard switch key right where you’d expect a useful key. It feels a bit more balanced if you are typing on your lap, and the folio keyboard cover not only has two positions for your screen but also a back cover to protect all sides of your iPad. My last iPad had a scratch or two on the back from coming up against keys or pens in my bag; the new case will eliminate that. I still wouldn’t fancy its chances if you dropped onto on the floor, mind you; the case is magnetic, so any sort of impact would dislodge it.

The Apple Pencil has changed too, using magnetic charging from the side of the iPad. This is the only way to charge the new Pencil; your old Pencil, if you had one, won’t work with the new iPad Pro either.

It is shaped slightly differently, with a flat side that sits against the iPad to charge. Apple has brought in a tap gesture for the Pencil that you can customise to switching between tools, and some developers are using it within their own apps too.

In relation to performance, the new chip brings a bump in speed useful for graphics-intensive tasks such as gaming. Multitasking is smoother, and switching between apps feels faster.

Could the iPad replace your computer? For many, it will come down to software. For image editing, the iPad Pro is certainly a viable option, with Adobe offering Lightroom and other editing apps on iOS. Video creators could also use the Pro for most of their work. But the single USB C port may be an issue, plus if you need any software that isn’t on iOS you’ll run into problems.

More screen, less bezel means a more compact iPad. Plus it’s powerful and the four speakers make for some impressive sound. The third generation also increases storage space to as much as 1TB – for a hefty price.

The USB C port is limited in what it can be used for, and a single port – plus no headphone jack – could cause issues for some users.

The redesigned Pencil has no cap to lose, plus it feels more comfortable in your hand. The iPad-only charging model might be an issue if you are trying to conserve iPad battery, but it’s a minor issue.

It’s another step towards replacing the laptop, but not for everyone – yet. Unshackle the USB C port and it’s almost perfect.