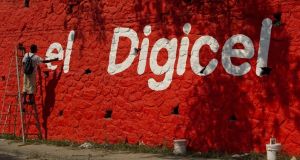 Businessman Denis O’Brien has insisted that talks by his telecommunications group Digicel with bondholders on delaying the repayment of some $3 billion (€2.6 billion) of debt were “going well”, even though the company has had to repeatedly extended a deadline for the creditors to sign up to the plan.

“We knew when we started this at the beginning of September, we knew this would take a long time because you have so many different views of people, and we’re trying to find a consensus,” Mr O’Brien said in an interview with Bloomberg TV on Friday. “It’s very consultative and the conversations are going well,” he added.

Digicel, which is saddled with $6.7 billion of debt, revealed at the end of August that it is looking for investors holding $2 billion of bonds due in October 2020 to swap their notes for similar securities that would be due two years later. The group also want holders of $1 billion of debt that matures in 2022 to exchange their bonds for new 2024 notes.

The company’s 2020 bonds have slumped by about 30 per cent in value so far this year, to 70 US cent on the dollar, amid a sell-off of emerging-market debt against the back of a strengthening dollar, as well as concerns about Digicel’s overall debt burden and ability to reboot its earnings.

Digicel, whose operations span 31 markets across the Caribbean and South Pacific, announced on Tuesday afternoon that the deadline for bondholders to sign up is being extended from November 16th until one minute before midnight, east coast US time, on November 30th. It marks the fourth such extension in two months.

The proposed changes have been resisted by a cohort of bondholders, delaying the plan and keeping Digicel at the negotiating table.

“It’s bringing everyone with you, that’s what it’s about,” said Mr O’Brien on Friday.

Digicel raised $90 million from the sale and leaseback of 451 telecoms towers in Jamaica in September and is on track to generate a $55 million from a similar deal involving 309 towers in the South Pacific by the end of the year.

The group is targeting a drop in its debt burden to 5.7 times earnings before interest, tax, depreciation and amortisation (ebitda) for the 12 months to the end of next March from 6.7 per cent last March.

This is predicated on boosting earnings by 10 per cent to about $1.1 billion and selling off up to $500 million of assets, the company has signalled to debt investors, according to sources.

Mr O’Brien said the group, which has invested $2.3 billion on its network over the past four years diversifying from mobile into broadband, entertainment assets, and business solutions, isn’t planning large asset sales.

However, he added: “I wouldn’t rule it out, maybe small sales.”