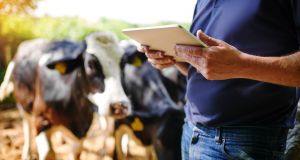 Some $1 billion (€920 million) has been invested in Irish agrifoodtech companies since 2012 with Ireland being one of only a few countries worldwide to see a rise in deal activity last year.

Overall, venture capital investment fell by 16 per cent in 2019 due largely to international trade tensions, Brexit and a weakening Chinese economy, according to figures compiled by Agfunder. The decline in funding last year mainly affected investment to consumer food delivery apps, which fell 56 per cent.

Europe continued to show particularly strong growth with agri-food tech funding rising 94 per cent to $3.3 billion (€3 billion) last year. The UK was the leader in the region and the fourth biggest globally with $1.1 billion (€1 billion) raised across 112 deals in 2019.

Agfunder, which has a database of nearly 30,000 companies, reported 1,859 deals last year, of which 584 transactions did not disclose prices.

RebelBio, the world’s first life sciences accelerator, is run by Sean Sullivan’s SOSV, was last year ranked the most active accelerator with 44 investments.

Irish start-ups in the agrifood tech space are rated highly overseas with companies such as Cainthus making headlines globally.

The sector, which has gained from the State’s strong track record in agriculture, has grown substantially in recent years, aided in part from the introduction of Galway-based agritech accelerator programme Yield Lab Europe, which last year announced a €21 million venture capital fund backed by Enterprise Ireland and AIB.

The Ireland Strategic Investment Fund has also invested heavily in the sector, putting €40 million into two Finistere-managed funds in 2017.

1 Lockdown exit: How can Irish economy reopen without big health risks?
2 Property market has not felt full impact of Covid-19, warns Sherry FitzGerald
3 Covid-19: Government announces €1bn in supports for businesses
4 Tesco says coronavirus costs could reach €1bn
5 I want to change my will quickly in case I fall ill. Do I need a lawyer?
Real news has value SUBSCRIBE