Revenues down at BT Ireland as operating profit rises 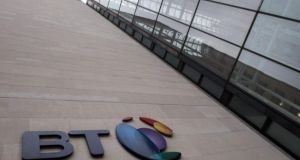 Turnover slipped at BT Ireland last year on the back of a decline in wholesale voice revenues due to mobile termination rate reductions and the transfer of a global business customer account to another group company.

Newly filed accounts for the group’s operations in the Republic show revenues at BT Communications Ireland Limited fell by 1.4 per cent to €419.6 million for the 12 months ending March 2019. This compares to turnover of €425.5 million a year earlier.

Operating profit in the year increased to €45.8 million from €33.6 million on the back of a reduction in charges from other group entities for network services

“Overall, this performance builds on the success of the previous year, as we continued to attract and strengthen relationships with Ireland’s global multinational base. We expanded our Irish workforce by 55 to over 660 people; enhanced our network capability and built on our product and service portfolio for business and wholesale customers,” said managing director Shay Walsh

“In the coming year, our focus is on investing in new areas of growth for us locally and internationally as well as transforming our cost base,” he added.

BT Ireland paid an €85 million dividend to its parent at the end of the reporting period, as against to the €289 million it paid out a year earlier.

BT Communications Ireland Limited provides global connectivity and networked IT services to both the public and private sector. It also offers wholesale network services to more than 50 communications companies, including Sky.

A breakdown of turnover shows the group received €265.8 million from equipment and other services. In addition, it earned €101 million from fixed access revenues and €52.9 million from ICT and managed services.

The Irish Times reported in November that BT Ireland, which is the State’s second largest fixed-line network, had been acquired by London-based investment company Mayfair Equity Partners in a deal that valued it at €300 million.

The deal has yet to be formally announced.

1 Coronavirus: Notion of a rapid economic recovery is at best wishful thinking
2 Coronavirus: Journal Media to cut pay by up to 20 per cent
3 Nice to see you: Which is the best video calling option around?
4 Frontline bank workers to get pay top-ups during Covid-19 crisis
5 Fierce backlash to Dutch hard line on eurobonds
Real news has value SUBSCRIBE