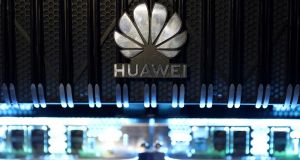 Huawei is the second-biggest seller of smartphones globally, behind Samsung. Photograph: Isabel Infantes/AFP

Disquiet is rising in security circles over the recent awarding of a multimillion-euro mobile contract by the Garda to Eir amid concerns over the telco’s use of equipment from Huawei.

It comes after a decision was taken last year to replace all equipment made by the company which was in use by the force. Last year the Minister for Justice, Charlie Flanagan, told the Dáil that the only pieces of Huawei equipment being used by the force were branded modems that were being phased out.

A spokesman for the Garda told The Irish Times the force was satisfied it had suitable device encryption services to ensure the security of all mobile devices.

The contract was won by the telco in a recent tendering competition held by the Office of Government Procurement. It calls for an initial 1,500 handsets and 1,000 Sim-only packages, with the possibility of this rising to about 14,000 smartphones and 8,000 data connections.

All handsets must include a passport reader app and a mobile payments solution capable of accepting fines. They must also allow “for the sharing of code and microservices with other police forces”.

The 46-page tender covers costs and coverage, but there is no mention of applicants needing to meet national security considerations. Nor is there a breakdown of which Garda personnel will use the handsets.

Huawei is the second-biggest seller of smartphones globally, behind Samsung. The company has consistently denied allegations that its technology might be used for espionage and has suggested it is merely a pawn in a trade war between the United States and China.

Eir chief executive Carolan Lennon recently said in media interviews that the telco was “very happy” to continue using equipment from the company equipment, including in its 5G network.

A spokeswoman for Eir said the company had not been given approval to discuss the contract.

The US has blacklisted Huawei on national security grounds. While the British government recently defied pressure from Washington to allow Huawei to have a limited role in its 5G networks, some Conservative MPs are pushing back on this. New guidelines announced late last month by the European Commission give member states the right to restrict the equipment maker from critical parts of their networks.

A number of telcos are currently removing Huawei equipment from their core infrastructure, including Vodafone Group, which recently estimated this would cost it €200 million.

This week senior White House officials were in Dublin to again press their opposition to the Chinese company being considered for use in 5G infrastructure.

Irish security analysts said if the handsets were for use by standard law enforcement then there would not be huge grounds for concern in terms of national security.

However, if their use included security intelligence operations then it would cause unease. They also warned that using Huawei equipment of any kind might damage the force’s credibility and relations with other police agencies, while also stressing that encryption is never 100 per cent safe.

“The risk is not so much one of espionage – although if you allow them into the core of a network that is theoretically possible – but rather concerns about disruption. It shouldn’t be possible, but there is a remote chance that Huawei finds a way to enable its government to disrupt a network at a critical time,” he said.