EU presents new plans for AI and data as it looks to catch-up with US, China 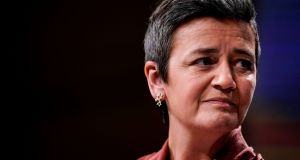 President of the European Commission Ursula von der Leyen and executive vice-president for digital affairs Margrethe Vestager led the presentation of the AI and data initiatives in Brussels. Photograph: AFP

The European Union is seeking to attract over €20 billion in investment in artificial intelligence per year over the next decade, as it looks to catch up with the United States and China.

In proposals made public on Wednesday, the European Commission said it also plans to create a single European market for data.

President of the European Commission Ursula von der Leyen and executive vice-president for digital affairs Margrethe Vestager led the presentation of the AI and data initiatives in Brussels. They form part of a a raft of digital market reforms proposed by the commission this week that also include steps to rein in the power of big tech companies such as Google, Facebook and Amazon.

Under the new proposals, there are plans to significantly boost AI investment in Europe to over €20 billion. This compares to just €3.2 billion in 2016.

Over the past three years, EU funding for research and innovation for AI has risen to €1.5 billion, a 70 per cent increase on the prior period. However, this remains a fraction of the investment seen in North America and Asia.

The commission warned US and Chinese companies that they will have to submit to strict new rules if they want to deploy such technology in Europe. Its white paper proposes regulatory testing similar to that seen for chemicals, cosmetics and toys.

“The European Union is and will remain the most open region for trade and investment in the world, but this is not unconditional,” the commission said. “Everyone can access the European market as long as they accept and respect our rules.”

A particular area of concern for the commission is facial recognition technology, although it stepped back from introducing a complete ban.

The commission said while AI can be used for good, it can also do significant harm.

“AI is a strategic technology that offers many benefits for citizens, companies and societies as a whole provided it is human-centric, ethical, sustainable and respects fundamental rights and values,” the commission said in its new white paper.

Other elements in the commission’s proposals include new rules covering cross-border data use, data interoperability and standards.

One possibly controversial proposal calls for doing away with EU rules against anti-competitive data sharing. There is also a goal for data centres to be climate-neutral by 2030.

As part of its Digital Services Act, the EU said it was considering rules for large powerful platforms, such as Facebook and Google, that act as gate-keepers to ensure their markets remain fair and contestable. The possible legislation is seen as a way to complement antitrust law, which some have criticised for being to slow to restore balance in markets harmed by dominant companies’ behaviour.