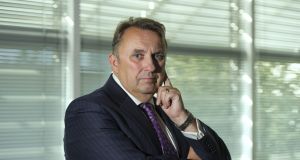 Irish IT services group Ergo is forecasting further growth as it reported revenues of €85.2 million last year as the company said it recently foiled a major ransomware attack.

Ergo said it immediately moved to lock down servers late last Wednesday after becoming aware of a serious security incident. It was able to recover most of the data lost from the attack within hours and without paying a ransom demand. However, the incident led to customers of software company Avonbrook being unable to access its services for a number of days.

Avonbrook provides dealer management systems to the Irish motor trade. Several dealerships, with franchises for brands including Ford, Hyundai and Kia, were affected by the attack. Avonbrook’s chief executive Gerry Meyrick stressed that it did not provide hosting services for customers and that the solutions it provided to dealerships were being hosted externally by Ergo.

Ergo founder and chief executive John Purdy declined to say how much the ransom demand was for or whether the attack was aimed primarily at its systems or at Avonbrook’s, as the incident is still under investigation. He did say, however, that none of its other clients were attacked and no ransom was paid out.

“We had our security people all over it and it was managed incredibly well. The incident goes to show that having a plan in place is critical,” Mr Purdy said.

His comments come as newly filed accounts show Ergo beat its own revenue forecasts last year, recording turnover of €85.2 million in 2019, up from a projected €74 million.

The company posted a 25 per cent rise in revenues on the €68.4 million reported in 2018. It is now targeting sales of €90 million this year, adding that its long-term goal of reaching the €100 million revenue milestone by the end of 2021 is “well within reach”.

Ergo recorded its best ever financial performance last year as earnings before interest, taxes, depreciation and amortisation (ebitda) rose to a record €3.4 million, up from €3.1 million a year earlier.

“There is still enough juice in the tank for us,” said Mr Purdy, who founded Ergo in 1993 with Tim Sheehy as a two-man firm selling toner cartridges for printers.

The company now employs more than 300 full-time employees and a further 130 contractors. It offers IT solutions ranging from cloud and managed services to software and infrastructure.

“We’re looking at one or two acquisitions that should tip us above €100 million. In the last quarter we also agreed our new strategy for the next three years that will see us shooting for €150 million in revenues and expanding further into other geographies,” said Mr Purdy.

“We are in other markets already, providing services across six continents, but this is primarily to Irish headquarters with operations abroad. Doing this has opened up other opportunities for us that we intend to follow up on,” he added.