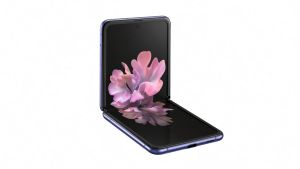 The Samsung Galaxy Z Flip features a clamshell design which folds out into a larger 6.7-inch screen

Who needs a folding phone? It’s a question I’ve been asked over and over again in the past few days as I tested out the Samsung Galaxy Z Flip.

You may see them as a gimmick – and an expensive one at that – but I’m not the only one who feels they need one. And even if I didn’t need a folding phone as such, I want one.

But at the same time, I don’t want a rubbish one. And let’s be honest, some of the folding screens we’ve seen have been less than stellar.

Then along came Samsung with the Fold, and Huawei with the Mate X, and suddenly the phone makers were upping their game. Let’s not dwell too long on the Fold’s initial hiccups; the Samsung’s Galaxy Z Flip is the phone maker’s second attempt at a folding screen, and so far, it’s going a little better than the initial test of the Fold. It takes a few of the lessons learned with the original phone – not having an obvious plastic layer on the screen that looks as so similar to a protective cover that people try to peel it off and bin it is a start – and improves the overall package.

The Z Flip is a little different to the Fold. It’s a clamshell design, folding out into a larger 6.7-inch screen.When closed, a small touch sensitive display on the outside of the phone shows you the essentials – who is calling, the time, notifications – so you don’t have to open the phone every time it buzzes. A quick demo around The Irish Times office saw it compared to a make-up compact, or an accessory from Star Trek.

What about concerns over the durability of the screen? This test is only a matter of days long; real issues won’t show up for weeks or months, but there’s no real hint that the screen on the Z Flip will suffer. You can’t overextend the screen, for a start. The hinge itself feels sturdy, disappearing into the phone as it flattens out. You can’t bend the phone backwards unless you applied far more force than could be deemed accidental.

As a nice touch, that’s where Samsung has hidden its branding; you only see the Samsung logo once the phone is closed. The hinge also has some little brush things (yes, that’s the technical term) intended to keep out the dust and crud. There are some differing opinions on the effectiveness of this, but it should work for most pocket crud. A trip to the beach might be a different story, mind you, so be careful where you take it. It is also not water resistant, which is the first premium phone in a while that doesn’t include it.

There is a slight crease in the screen, right where the phone bends. At the moment, that’s the trade-off for having a folding phone; that fold has to go somewhere. Is it enough to spoil the whole thing? Not in my experience. Once the screen is active, you don’t notice that crease unless you go looking for it – ie hold the phone at an unnatural angle. Testing the phone with Netflix and YouTube clips, I didn’t even register the crease. It’s less intrusive than the notch for the camera on many of the current crop of smartphones (side note: that rarely bothers me these days either).

There is no loss of touch sensitivity on that crease either; even with the phone half open, it still responds to touch right across the centre of the phone. The screen also adjusts itself if you leave it open halfway.

The one thing that may bug some people is that you can feel the crease, which may put some people off. It’s not massively noticeable though, so it depends on how much you are willing to compromise on certain details.

Samsung says it is its first folding phone with a glass screen. Does that mean it’s more durable? I couldn’t quite bring myself to try to scratch it deliberately, but given that it’s a folding screen any glass on it is going to be quite thin. Plus there is a thin layer of plastic over the top of it, so expect to pick up some scratches. In saying that, I have plenty of phones with Gorilla Glass screens that sort some lovely scratches after a couple of trips in my pocket with keys or coins. At least the main screen in the Z Flip is protected by the clamshell design.

The folding screen is a novelty but it’s functional. You can open the phone at different angles and the screen adjusts itself. And the screen itself still looks great.

The glass screen is still prone to scratches, and there’s the matter of the crease across the centre. Plus the phone is not waterproof or dustproof.

Will the Z Flip herald the way forward for phones of the future? The jury is still out but so far, I’m won over. Just shop around for a very good deal.