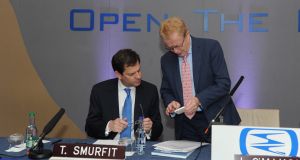 Our lead story this morning concerns packaging giant Smurfit Kappa where a major shareholder that was a thorn in the side of management earlier this year as it refused to engage with would-be suitor International Paper has sold down its stake.

Over at Ryanair, talks aimed at ending a dispute between the airline and a group of its Irish pilots enters its final day of planned talks today under mediator Kieran Mulvey. Ryanair and the Irish Airline Pilots’ Association, part of trade union Fórsa, this week resumed efforts to end the month-old dispute, which has led to five one-day strikes at the company, the latest one last Friday.

Low cost shopping chain Lidl expects to open a store on the site of the old Belgard Inn in west Dublin by spring next year, in a development that is set to incorporate a new pub. Demolition contractors recently moved on to the site, which Lidl bought for about €2.6 million towards the end of the recession in 2013.

In international news, leading Turkish business groups have called on Ankara to introdce a range of measures in response to a currency crisis that has battered the lira. The move was a rare show of public dissent from Turkey’s corporate sector, since many business figures are reluctant to openly challenge the government of President Recep Tayyip Erdogan.

Finally, Cliff Taylor asks in his column this morning whether we can finally escape the old house price roller coaster of sharp and destabilising ups and downs – but concludes that you wouldn’t bet on it.

Stay up to date on developing business stories by signing up for our Business Alerts and choose stories that matter to you or your business from any or all of our thirty eight categories.

1 British exceptionalism backfires in style as Johnson tests positive for coronavirus
2 Coronavirus: Construction sector most significant part of new shutdown
3 Can husband keep savings and half the house in divorce?
4 UK needs to be honest about its Covid-19 strategy
5 Volkswagen burning through €2bn in cash per week
6 Remote working doesn’t suit everyone, and it exposes woolly leadership
7 Will Covid-19 force Primark to rethink decision not to sell online?
8 Wetherspoon’s panto-villain chairman may have the last laugh
9 Denis O’Brien’s Digicel asks creditors to write off some of its $6.8bn debt
10 Coronavirus ‘medicine’ could trigger social breakdown – Swedish industrialist
Real news has value SUBSCRIBE