Spanish, Italian, French and UK banks are most exposed to Turkey’s free-falling currency 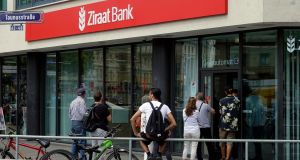 Customers stand in queue outside the Turkish Ziraat Bank branch in Frankfurt, Germany

Turkey’s economic crisis poses a threat to European banks with business in the country.

Spain’s BBVA, Italy’s UniCredit, France’s BNP Paribas, Dutch bank ING and Britain’s HSBC are the most exposed to Turkey and vulnerable to its free-falling currency.

Analysts see as manageable even a worst case scenario - which they deem unlikely at present - under which these banks would be forced to write off completely their local operations or exit the country.

However Turkey’s trouble are feeding risk aversion among investors, who worry about financial market turmoil spreading to other emerging countries or even Italy, which faces key decisions over its budget and credit ratings after the summer.

Here is a summary of the five banks’ Turkish exposure and of analyst estimates of the possible impact of the crisis:

The Spanish group controls 49.9 per cent of Turkish bank Garanti after raising its stake in February last year. Garanti Bank, which has a book value of €4.4 billion ) for BBVA, had $84 billion (€73.8 billion) in assets as of June 30th.

Garanti accounts for around 13 per cent of group earnings, according to Deutsche Bank, which estimates that a worst case scenario would wipe around 12 per cent off BBVA’s group equity.

Analysts at JPMorgan Cazenove on Friday cut their 2019-2020 earnings per share (EPS) estimates for BBVA by around 6 per cent to take into account a further weakening of the lira and rising credit losses for lenders in Turkey amid slower growth.

BBVA said it was comfortable with its stake in Garanti and had great experience in managing businesses in volatile emerging countries under a model which made each unit fully responsible for its own capital and liquidity management, preventing any liquidity transfers from the parent company to the group’s subsidiaries or among them.

The stake in Yapi Kredi is worth a little less than 800 million euros at current market values, but Mustier ruled out any impairments saying the unit performed very well and UniCredit had already separately booked the currency hit. Deutsche Bank estimates a 4 per cent hit to UniCredit’s equity in a worst case scenario.

However, JPMorgan Cazenove analysts see instead a 59 basis point boost to UniCredit’s core capital in the event of a write-off thanks to lower risk weighted assets and the reversal of currency reserves with a negative value which the bank has been forced to increase recently as the lira slid.

The broker cut its 2019/2020 EPS estimates for UniCredit by around 3 per cent due the Turkish situation.

A spokeswoman for UniCredit said to refer to its first-half financial report for any information on its Turkish exposure. In presentation slides for those results, UniCredit said Yapi Kredi accounted for 2 per cent of group revenues and a 10 percent drop in the lira would cut 2 basis points off its core capital ratio.

The Dutch bank has a fully-owned subsidiary in the country, ING Turkey.

Deutsche Bank analysts estimate a worst case scenario would translate into a hit of around 4 percent for ING’s book value due to the loss of equity as well as of intragroup funding. JPMorgan Cazenove sees an up to 87 basis point erosion of ING’s core capital under an extreme scenario due to the large intragroup funding exposure.

ING did not respond to a request for comment.

The French group controls 72 per cent of the Economy Bank of Turkey (TEB), partly through a local joint venture.

Deutsche Bank analysts estimate Turkey accounts for around 2.5 per cent of BNP Paribas’ pretax profit. In a worst case scenario, the banking group would lose 1.7 per cent of its net book value, they say.

A person close to BNP said the group’s exposure to Turkey was very limited, accounting for only about 2 per cent of the bank’s loans. The person said TEB was funded locally with deposits and equity and was a well-managed bank with systematically healthy profits.

The banking group operates HSBC Turkey in the country and Deutsche Bank estimates it would lose $400 million or 0.3 per cent of total group equity under a worst case scenario. A spokeswoman for HSBC declined to comment. - Reuters

1 Covid-19 has shown that much of ‘normal’ life should have been binned years ago
2 Cabinet to agree on implementing EU travel plan
3 Level 5 restrictions risk pushing economy into double-dip recession
4 ‘Lockdown lobby’ needs to explain why this time would be different
5 ‘It’s fantastic living here – in the gateway to Asia’
6 Number of houses for sale falls to 14-year low
7 ‘I struggled in the beginning but now I really love it’
8 Why multinationals are calling employees back to Ireland
9 The Irish boss steering Circle K through Brexit and a pandemic
10 M7 Real Estate pays €28.5m for two Dublin offices
Real news has value SUBSCRIBE