Turkish business groups urge Erdogan to heal rift with US 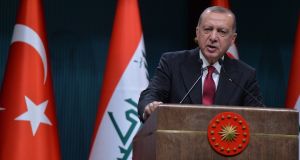 Turkish president Recep Tayyip Erdogan: “If they have the iPhone, there is Samsung on the other side.” Photograph: EPA/STR

Leading Turkish business groups have called on Ankara to tighten monetary policy, introduce austerity measures and urgently resolve a dispute with the US after a currency crisis that has battered the lira.

The move was a rare show of public dissent from Turkey’s corporate sector, since many business figures are reluctant to openly challenge the government of President Recep Tayyip Erdogan. It highlighted the extent of its concern about the slide in the lira, although the currency staged a rally on Tuesday.

In a sign of possible tensions between Turkish business and government, Mr Erdogan toughened his stance, calling for a boycott of US technological products.

The Turkish Industry and Business Association (Tusiad ) and the Union of Chambers and Commodity Exchanges of Turkey (Tobb) said that “tighter monetary policy is required in order to stabilise exchange rates”, as were accompanying “austerity measures”.

At about 6.5 to the dollar, the Turkish lira was up by about 5.5 per cent on the day towards the end of trading, but has lost more than 40 per cent of its value this year.

The currency’s slide has piled pressure on Turkey’s corporate sector, which holds $293 billion in foreign currency loans, and made it ever harder for many companies to service their debt.

The business organisations called for continued “diplomatic efforts to urgently resolve the problems in the US-Turkey relationship”, but Ankara gave no indication it was preparing to adjust course.

Berat Albayrak, finance minister, told members of the ruling Justice and Development party the government would continue with measures to protect the lira and those companies with foreign-exchange denominated liabilities.

Reuters reported that, for a second consecutive day, Turkey’s central bank was not lending at its benchmark interest rate of 17.5 per cent, instead making funds available at 19.25 per cent.

Mr Albayrak said there had been no significant outflow from bank deposits and that Turkish lenders’ capital ratios remained well above the threshold.

The finance minister also vowed that Turkey “would not turn its cheek to those with a clenched fist”, using the kind of rhetoric often employed by Mr Erdogan, his father-in-law.

Mr Erdogan himself opened up a new line of attack on the US, saying the country would no longer buy from Apple or other US technology producers.

“If they have the iPhone, there is Samsung on the other side,” he told ruling party members on Tuesday. “In our own country, there is the Venus,” a reference to a domestically produced smartphone.

In a symptom of concern about the impact of the Turkish lira’s plunge on Turkey’s corporate sector, Fitch, the rating agency, downgraded a leading Turkish food group.

It warned that Yasar Holding, a producer based in the coastal city of Izmir, was “vulnerable to the sharp depreciation of the Turkish lira against hard currencies that has occurred during 2018”, noting that 55 per cent of the company’s debt and 30 per cent of its costs were in hard currency. – Copyright The Financial Times Limited 2018