July is busiest month ever for Republic’s skies 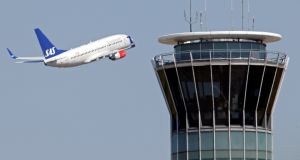 There were a record 115,834 flights, take-offs and landings in the Republic’s airspace in July, an average of almost three every minute, the latest figures show.

Air traffic control and safety body the Irish Aviation Authority (IAA) said on Tuesday that last month was the busiest July on record.

According to the IAA, there were 115,834 aircraft movements in the Republic’s airspace in July, an increase of 3.2 per cent over the same month last year. The number includes take-offs and landings at Cork, Dublin and Shannon airports.

It also includes aircraft flying over the Republic between Europe and North America which did not touch down here but use the IAA’s air navigation services. Flights in this group rose 4.4 per cent.

A third category, north Atlantic communications, covers flights through the Shanwick Oceanic zone, which were up 1. 6 per cent.

Shanwick covers a large section of the Atlantic, stretching to the mid point between Ireland’s west coast and north America’s east coast and from a line south of Iceland to a parallel north of Spain.

The IAA handles all communications from aircraft flying through this zone, making it a key point of contact for traffic over the north Atlantic.