Ryanair adds to Boeing order, Irish whiskey preps for rebound, and why we should listen to dissenting voices 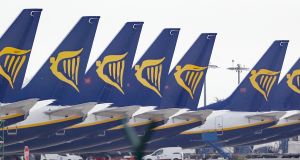 Ryanair has added an extra 75 Boeing 737 Max aircraft to its original order, bringing the total to 210 in a deal worth $22 billion (€18.1 billion), reports Barry O’Halloran. It is the first firm order for the Max following a 20-month grounding by air travel safety regulators prompted by two crashes, in Eithiopia and Indonesia, that killed 346 people.

Car insurance claims are down 35 per cent in the Republic due to a reduction in daily commutes and road journeys since the onset of the Covid-19 pandemic, saving the industry €287 million in reduced claims, according to a report by comparison platform HelloSafe. Eoin Burke-Kennedy reports.

Spring, an Irish-founded home-buying service that offers to buy properties sight unseen with sales completed in under a week, is looking to expand in Ireland. The company, which has its headquarters in London and has a £300 million (€332 million) annual buying capacity, commonly buys homes from people who are moving into retirement homes or emigrating, writes Charlie Taylor.

The Covid-19 pandemic has hit Irish whiskey sales, but the sector is gearing itself up for a rebound next year, according to the Irish Whiskey Association. New figures show that more than €1.5 billion has been invested in the sector over the past decade, a period in which global sales have grown from 60 million bottles to 144 million, writes Charlie Taylor.

In gambling news, Paddy Power owner Flutter Entertainment plans to buy out backers including Google Ventures and New York-based investor KKR to take 95 per cent of its US business Fanduel in a €3.4 billion deal. Barry O’Halloran reports.

The Web Summit continues today. On Thursday, Ireland’s data commissioner Helen Dixon told the summithow attempts to attempts to reach agreement with other EU authorities on whether Twitter breached GDPR rules have been extremely difficult. She said the process to reach a unified agreement with other supervisory bodies had taken too long and been overcomplicated, but it was the first time the EU had been through the process, and “it can only get better from here”, writes Charlie Taylor. .

In Agenda, Charlie Taylor pays a visit to Northern Irish medical diagnostics company Randox’s headquarters in Co Antrim, to find out more about the company that’s playing a key role in the UK government’s Covid testing programme. Randox is building a new Covid testing laboratory at its Co Donegal facility, with capacity for up to 30,000 tests a day.

In World of Work, Olive Keogh explores how companies could be haemorrhaging knowledge without even knowing it as employees continue to work from home, despite high productivity levels among staff.

And in Caveat, Mark Paul is writing about the importance of listening to voices of dissent, and how it’s the only antidote we have to groupthink.