Spring, which has £300m budget, looking to disrupt buying process with speedy offers 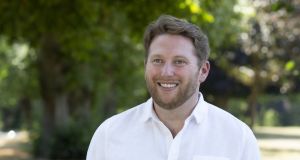 Spring chief executive Cormac Henderson: ‘We operate in Scotland and Wales and there’s no reason why we wouldn’t introduce it into Ireland as well’

Spring, an Irish-founded home-buying service that offers to buy properties sight unseen with sales completed in under a week, is looking to expand locally.

The company, which has its headquarters in London and has a £300 million (€332 million) annual buying capacity, was originally established in 2007 by Cormac Henderson. It raised £43 million in equity financing in a deal last year with additional debt funding taking the total capital pool to £100 million.

The company has just rebranded from National Property Trade, with an upgraded proposition and with Mr Henderson and fellow Irish man Shane Miller-Bourke leading the business.

Mr Henderson said Spring expected to make about 300 acquisitions this year to a value of about £90 million. Overall the business has made more than 1,000 acquisitions since it was originally founded, he said.

The company uses a similar business model to that of Open Door, a US-based start-up with big backers such as Softbank that was recently valued at $3.8 billion following a $300 million funding round.

The premise is essentially to cut out many of the steps involved in the house-buying process in order to speed up transactions.

Homes sold to the company do not need to be renovated or prepared for sale. Homeowners enter simple details about their property via Spring’s platform and it makes an offer, charging the seller a 9-15 per cent levy on the gross purchase price. It then sells on the property at a higher price.

Mr Henderson said Spring’s model allows it to cut out a lot of the steps and expenses associated with home-buying, such as auction fees or legal costs.

The company aims to make an initial offer for most properties sight unseen within 48 hours, with a guaranteed offer provided in less than seven days.

“We follow up an initial offer with a more detailed one coming after completion of a chartered survey,” Mr Henderson said. “We calculate the value in-house using technology similar to that used by mortgage lenders and insurance companies, and with an assessment by our experienced underwriters. Fees are confirmed via our pricing calculator with full transparency key to our success.”

He said sellers typically included people moving into retirement homes or emigrating, with a lot of sales also coming from probate, and landlords wishing to sell up.

“We operate in Scotland and Wales, and there’s no reason why we wouldn’t introduce it into Ireland as well,” he said. “My understanding of the market is that, as elsewhere it is pretty antiquated, with the whole selling process a stressful experience.”