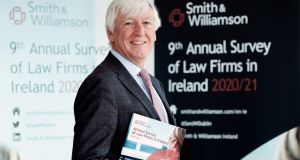 Almost two in three Irish law firms report a decline in revenue over the last year, while 60 per cent say they are concerned about maintaining profitability in the coming years, a survey of the sector by Smith & Williamson has found.

Sentiment among firms, which began 2020 already weighed down by Brexit and competitive pressures, has been further dented by the pandemic, with 80 per cent saying the outlook for the legal sector has deteriorated over the last 12 months.

Almost all firms – 94 per cent – said Covid-19 had resulted in a negative outlook for the sector, while 56 per cent described the impact as “significantly negative”.

In a bid to protect jobs, seven out of 10 firms availed of the Government’s temporary wage subsidy scheme (TWSS) earlier this year – an indication of the widespread impact that Covid-19 disruption had on the sector.

Despite the scheme, staff numbers were adversely impacted by the pandemic, with about one in three of all practices surveyed reporting a decrease in their workforce.

The 63 per cent of firms reporting a fall in revenues this year represents a marked increase on the 10 per cent that did so in the 2019 survey.

The average rate of revenue decline among the 20 largest firms was 10 per cent, while among other firms it was more than 20 per cent, the survey found, with firms affected to varying degrees by the closure of the courts and difficulty securing fees from clients in Covid-19 exposed sectors.

Larger firms with a diverse range of clients were better able to manage their exposure to Covid-19 slowdowns than smaller ones that “didn’t have the counterbalance of other parts of their business doing well”, Mr Wyse said.

This contributed to a divergence in the levels of optimism between Dublin-based firms – which are larger on average – and “the view outside Dublin”. Some 94 per cent of firms outside Dublin said the outlook for the sector had deteriorated compared to 77 per cent of Dublin firms.

Bigger firms were also in a stronger position to take “fairly swift action” once lockdown was implemented in March to switch to remote working and reduce overheads. One in three practices reduced fee earner salaries in 2020, while 40 per cent of the top 20 firms implemented salary reductions of 10 per cent or more, the survey found.

The majority of the 87 law firms – including 15 of the top 20 – surveyed for the ninth annual study, conducted on behalf of Smith & Williamson by market researchers Amárach, identified the economy as the key issue facing the sector over the next three years, ahead of concerns such as profitability and pressure on fees. Almost three-quarters of firms expect the next 12 months to see a further deterioration in the overall outlook.

As firms “battened down the hatches”, the anticipated level of mergers and acquisitions in the sector did not materialise in 2020.

A pick-up in merger activity is now likely to occur as firms develop succession plans and scale up practices to offer more services, Mr Wyse said. “For smaller firms, there is a succession issue and a scale issue.”

Although cybersecurity concerns were somewhat overtaken by the Covid-19 crisis this year – despite the additional risks posed by remote working – it remains an issue for the legal sector, with two-thirds of the top 20 respondents saying they had experienced a cyberattack in the past 12 months. Failure to report cyberattacks is believed to be a phenomenon among smaller firms, however.