Flutter to buy out US business in €3.4bn deal 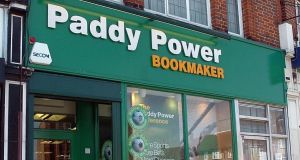 Paddy Power owner Flutter Entertainment plans to buy out backers including Google Ventures and New York-based investor KKR to take 95 per cent of its US business Fanduel in a €3.4 billion deal.

Flutter owns 57.8 per cent of Fanduel, which the Irish gambling giant has been using to grow in the newly opened US market since it bought the stake in 2018.

The Dublin-headquartered group said on Thursday that it will boost its stake to 95 per cent by buying Fanduel’s minority shareholder Fastball Holdings’ shares for $4.175 billion (€3.44 billion).

Lachlan Murdoch, executive chairman of media giant Fox Corporation, pledged that the group, now a shareholder in Flutter, would back a €1.22 billion share issue by the Irish business to cover part of the deal’s cost.

Other investors include Google Ventures, the investment arm of Google parent Alphabet, Shamrock Capital, an LA-based firm which specialises in backing media and entertainment businesses, and broadcasting and telecoms giant Comcast.

Boyd Casinos, Flutter’s partner in the US, will continue to hold the remaining 5 per cent in Fanduel. “It’s very unlikely that they will want to exit,” Mr Jackson said.

Jonathan Hill estimated that the price was a discount of around 45 to 50 per cent on Fanduel’s worth, when measured against rival Draftkings, which the market values at $21 billion.

The deal announced on Thursday accelerates Flutter’s existing agreement to buy out Fastball in 2021 and 2023.

Mr Jackson said Fastball’s shareholders favoured selling now at a discount to Fanduel’s value as it removed any uncertainty over the prospects of their cashing in their minority holding in the company.

Meanwhile, Fox Sports will retain its option to buy 18.5 per cent of Fanduel that stems from Flutter’s merger with Stars Group earlier this year. Flutter said it could provide “no assurances on whether any such transaction with Fox would take place”.

The Irish group intends to pay for the deal through $2.09 billion cash and by issuing 11.7 million new shares directly to Fastball.

Flutter will fund the cash element from its own resources and through a placing of new shares to raise around €1.22 billion that began on Thursday following the announcement.

The company, owner of Paddy Power, Betfair, Australia’s Sportsbet and various betting businesses in Europe, the US and elsewhere, published details of the proposed placing on Thursday.

Its statement noted that Flutter had consulted with major shareholders ahead of the announcement.

“The consultation has confirmed the board’s view that the placing is in the best interests of shareholders, as well as wider stakeholders in Flutter,” the company said.

Flutter pointed out that if the Fanduel purchase did not proceed, the group would keep the share placing’s proceeds, as it was not conditional on the US deal proceeding.

The agreement to buy Fastball’s stake in Fanduel depends on shareholder approval. Flutter will circulate details of the proposed deal to shareholders before holding an extraordinary general meeting ahead of the end of this month.