Web Summit to hold second event in Japan in 2022 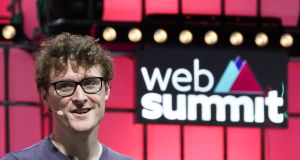 Web Summit cofounder Paddy Cosgrave said the plan was to have events throughout the year in the run-up to Web Summit in Portugal.

Technology conference Web Summit is to hold a second event in Japan, its chief executive said, as the company signed a five-year deal to bring its tech conference to Tokyo.

Web Summit Tokyo will take place in September 2022, with the Lisbon event following in November.

The Tokyo event is a partnership between between Web Summit, Ministry of Economy, Trade and Industry (METI) and the Tokyo metropolitan government. It is part of a strategy to bring events to more locations around the world in 2022, including Brazil.

Web Summit cofounder Paddy Cosgrave said the plan was to have events around the year in the run-up to Web Summit in Portugal. There are tentative plans for events in Africa and the Middle East, with Mr Cosgrave indicating that announcements on such events would be forthcoming in the next year.

“Tech is increasingly global,” he said. “We want to grow Web Summit. As the venue in Lisbon expands massively, it’s important for us to grow awareness in markets that aren’t as big for us. Japan and Brazil are two of the biggest markets in the world as that’s why we’re gong to them.”

The company’s Asian conference, Rise, becomes the latest event to move location, with its five-year residency in Hong Kong coming to an end next year. The 2022 event will be held in Kuala Lumpur.

“I think some fantastic engineers, entrepreneurs and investors are relocating to Japan from around the world. I feel there’s something happening, there’s a long legacy of innovation stretching back many decades,” he said. “It’s deep in the system that ability to build incredible things , and I think that’s increasingly extending to software as well.”

The conference made the decision to go to a virtual event for 2020 as the Covid-19 pandemic continued to rip through Europe, causing a second wave of lockdowns in many countries that had suppressed the virus in the months before.

More than 100,000 people are expected to attend the virtual event over the three days.

Networking has been replaced by face-to-face video calls on Web Summit’s event platform that took nine months to build.

Web Summit in Lisbon is expected to return to an in-person event in 2021, with more than 70,000 people attending. But there will still be the scope for people to attend through the online platform, with Mr Cosgrave acknowledging that it made the event more accessible, particularly to early stage start-ups that might find attending the Lisbon event out of their reach.

It is also a convenient way for the event to increase its reach, with the current capacity capped at 70,000 while they wait for the Lisbon venue to be increased in size.

While the conference platform will be made available for free to events in 2021, Mr Cosgrave said the preference was to get back to in-person events as soon as it was safe to do so. However, he acknowledged that would be impossible for the first quarter and difficult for those organising major events in the second quarter of the year.

Among the start-ups making announcements at this year’s event was Irish robotics company Akara, which has created a robot that can help make cleaning in hospitals easier.

The technology is safe to use around people, eliminating the need to evacuate rooms during the process.

“Violet is the product of two years’ worth of innovation and hard work, but in reality, is a system which has been over 100 years in the making. Cleaning methods in hospitals and care settings around the world have largely gone unchanged since before the Spanish Flu in the early 1900s, and Covid-19 has accelerated the need to address this issue,” said chief executive Conor McGinn.

“ Violet is the culmination of that history and presents hospitals with a system which doesn’t just save lives and money but is designed to work alongside existing frontline staff.”