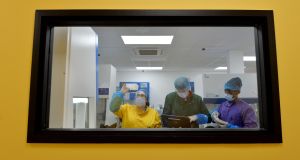 The extraction lab where coronavirus is extracted and isolated from patient samples at Randox. Photograph: Alan Betson

In a week in which Irish lockdown restrictions eased and the world’s first Covid-19 vaccine was given approval, Randox, a Northern Irish diagnostics company, was heralding the completion of its six-millionth test for the virus.

By anyone’s standards, the way the company has responded to the pandemic is impressive, despite some controversy both over how it secured contracts with the UK government and alleged testing issues.

Just two weeks after Chinese authorities shared the genetic map, or genome, of the virus, Randox had developed its own test for Covid-19. By the end of March it was completing 150 tests a day: this has since risen to more than 80,000 a day and the company plans to expand this further, to 100,000, with its site in Dungloe, Co Donegal, currently being upgraded to boost testing capacity.

By November 18th, Randox had completed five million tests as part of the UK’s national testing programme – roughly a quarter of all tests done under that scheme – with many more being carried out under private contracts.

Two week ago the company launched a €99 Express Covid-19 testing service at Dublin Airport, catering to anyone who wants or needs a rapid result before travelling.

A visit to the company’s headquarters in Crumlin, Co Antrim, shows how impressive the operation is. The site, in a former British army barracks in Massereene where two soldiers were shot dead by dissident republicans in 2009. Before that, beginning in 1942, it was a factory producing torpedoes to be used in the second World War.

On the outside Randox Science Park still has the looks of a barracks. Behind the gates it is a different story, with newly constructed facilities dotting the landscape and multitudes of workers walking around, many decked out in full personal protective equipment (PPE) with their first names scribbled on the back of their lab coats so they can recognise one another.

The site is largely self-contained. As well as the four laboratories, there are also engineering and manufacturing centres, so machines can be constructed quickly to suit different processes.

The company also manufactures a number of products, including a benchtop analyser lab called Discovery.

The closer you get towards the part of the site where coronavirus may be present, the fewer people there are and the more heavily clad in PPE they are likely to be. To further avoid possible contamination, the company is developing its own technology to automate as many Covid-related processes as possible.

Founder Dr Peter FitzGerald says he is confident Randox will retain all the additional staff it has taken on for Covid testing whatever happens in terms of vaccine roll-outs. It plans to transfer them to more highly skilled R&D work as more mundane tasks become automated.

Most staff are friendly to this visiting journalist, though some are a little wary following negative coverage of the company’s testing procedures in an undercover investigation by Channel 4’s Dispatches programme, which was broadcast last month.

That programme alleged “serious failings” at Randox’s labs, with one expert saying the company had a “cavalier approach to safety”. Randox has strongly rejected all the claims made against it.

The company was founded by FitzGerald in a converted henhouse at the back of his parents’ home in 1982. It acquired the former barracks it now calls home in 2015. In recent months it has built 35,000sq ft of new laboratories and taken on more than 700 additional staff to deal with Covid testing as part of a £41 million investment.

The company plans a further £27 million spend over the next six months to bring total Covid-related spending to £68 million.

That sum is nothing compared with the amount the company has won in contracts, however, with the UK government having awarded it nearly half a billion pounds in taxpayer funds since the pandemic began.

The move towards Covid testing may be paying dividends for Randox in the short term but, with the likelihood of a number of vaccines being rolled out in the coming months, is the company wise to have focused so heavily on the coronavirus test?

“Obviously there are lots of unknowns in terms of the vaccines and when they will be widely available, but we suspect it may be more complex to roll out than people think and that testing will continue for some time,” says Mark Campbell, senior manager at Randox.

“Furthermore, this whole experience with Covid is leading to a greater appreciation of diagnostics as a whole,” he adds. “There is the potential for a great reset in healthcare because much of the focus generally has been on reacting to people becoming unwell. Diagnostics can lead to us being more proactive by establishing ahead of time how people might become unwell, which would not only help prolong life but cut the cost of healthcare.”

In addition to Covid-related spending, Randox has spent many millions in recent years developing biochip array technology that can perform multiple tests from a simple blood sample.

It initially ramped up Covid testing with an assumption that it could provide results not just for Covid but for other possible health issues as well. It quickly came to understand, however, that for now at least, clients simply wanted a yes or no result on coronavirus.

This isn’t the first time Randox had wrongly assumed what people might want in terms of testing. The company has been developing and manufacturing diagnostic tests for use by hospitals, clinics and veterinary laboratories since it was founded. In recent years, though, it has also focused on a consumer-focused offering, opening health clinics where individuals can get a glimpse of future health issues through a simple blood test that tests for multiple diseases and illnesses.

Randox planned at least 50 health clinics worldwide, including in Dublin, but it has only introduced a handful to date. Campbell expects that, as the Covid-19 frenzy lessens, there will be more interest in finding out potential health issues ahead of time.

FitzGerald is also adamant that without having undergone the process of establishing the public health clinics, Randox wouldn’t have had the expertise required to deal with the many logistical challenges presented in testing so many people.

For its contract with the UK government, Randox has mainly been doing tests for care homes. The company’s previous knowledge of other types of coronaviruses such as Sars meant it could move quickly to develop its Covid test, which is a polymerase chain reaction (PCR) one – claimed to be “the gold standard of testing” due to its accuracy.

The set-up in Crumlin is impressive, but the company’s operations have come under scrutiny. In addition to the allegations made in the Dispatches programme, the company also faced questions earlier this year when up to 750,000 unused testing kits were recalled as a precautionary measure due to safety concerns.

There have also been claims that Randox has won government contracts largely as a result of the close links of company consultant (and former Northern Ireland secretary) Owen Paterson and his old friends in the Conservative Party.

“The bad publicity hasn’t affected business,” says FitzGerald. “It is more annoying than anything because the things that have been said are simply not true.”

Perhaps surprisingly, considering Randox’s headquarters is less than 200km from Dublin, he says the company has had little contact with health authorities in the Republic since the pandemic began.

“They probably knew we had a tender with the British government early on, and I suspect that there were sensitivities due to this,” says FitzGerald.

As a scientist, FitzGerald is clearly pretty au fait with how coronaviruses work. But he found out even more when he and some other colleagues were themselves diagnosed with Sars-CoV-2 in mid-March.

“There were maybe four out of seven of us that got it, and I had it relatively bad in that I was in bed for a few days,” he says. “The fact that a few of us in ended up getting it probably made us even more neurotic than normal about ensuring all the safety procedures are correctly followed.”

With a possible end to the pandemic in sight, FitzGerald believes some good will come out of the crisis.

“The good thing about this is the impact it will have on preventative healthcare in terms of accelerating the knowledge and understanding we have of the immune system and how we can bolster it,” he says.

“Vaccines are one form of protection, but they aren’t very sophisticated. The more we can come up with defensive mechanisms that are uncovered through focusing on preventative health, the greater impact it will have on so many disease conditions.”

RANDOX: BY THE NUMBERS

– Randox has completed more than six million Covid tests since the pandemic began.
– The company identified the fourth positive Covid case in the UK.
– It has now completed about a quarter of all tests conducted as part of the UK government’s Covid testing programme.
– The company has invested £41 million in Covid-related testing, with a further £27 million spend planned over the next six months.
– Randox employs more than 2,000 people, nearly a quarter of them researchers and scientists.
– It took on an extra 700 staff to deal with Covid testing.
– Turnover for the 18 months to end-June 2020 was about £250 million.