Retail sales fall in December but remain up in annual terms 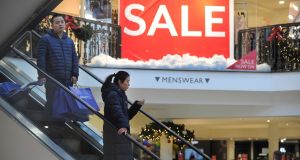 Shoppers in Arnotts on the first day of the store’s Christmas sale. Photograph: Aidan Crawley

Retail sales fell in December, the busiest shopping period of year, according to the latest official numbers.

They indicate that seasonally adjusted sales declined by 0.4 per cent in volume terms last month, but were up 3.7 per cent on an annual basis.

If volatile car sales are excluded, there was an increase of 0.7 per cent in December and were up 5.1 per cent in annual terms.

The sectors with the largest monthly volume increases were hardware, paints and glass (up 3.9 per cent ) and food, beverages and tobacco (up 3.7 per cent).

The sectors with the largest month-on-month volume decreases were department stores (down 7.3 per cent) and motor trades (down 4.2 per cent).

“Retail sales continue to remain erratic on a monthly basis and are still swinging back and forth, but the underlying trend is positive,” Cantor Fitzgerald economist Alan McQuaid.

“Even with the fluctuation in consumer sentiment, overall personal spending has been positive in the past few years, boosted by the increase in the numbers employed in the country,” Mr McQuaid said.

“This is despite the fact that the weakness in sterling since the June 2016 Brexit referendum has enticed some shoppers to spend in Northern Ireland, ” he added.

“We think personal spending will post another positive increase as the unemployment rate continues to drop and disposable incomes rise. However, consumer concerns over a global economic slowdown and Brexit should see a lower spending rise of 2-3 per cent for both measures in 2019,” he said.