Retailer hopes to redeploy up to half those being made redundant 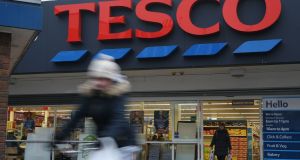 Up to 9,000 jobs are at risk as part of a restructuring programme announced by British supermarket giant Tesco on January 28, 2019. Photograph: Daniel Leal-Olivas/AFP/Getty Images

Tesco plans to slash thousands of jobs as the UK’s largest supermarket retailer embarks on a major shake-up to cut costs.

Tesco said on Monday that about 9,000 positions were at risk but about half the workers affected were expected to be redeployed to new roles.

The retailer briefed staff at dozens of stores throughout the UK on the wide-ranging measures, which will include sweeping job losses. Among the changes are plans to close counters in about 90 stores, with the remaining 700 trading with either a full or flexible counter.

The move by Tesco, which employs more that 300,000 people in Britain, shows its operation diverging from rivals such as Morrisons, the fourth largest player in the UK sector, which emphasises its army of trained butchers, fishmongers and other specialists who prepare food in-store.

Jobs affected include stock control and merchandising, where simpler processes will be introduced to reduce workload.

Changes will also be made at the retailer’s head office, which Tesco said would create “a simpler and leaner structure”.

“Overall, we estimate that up to 9,000 Tesco colleague roles could be impacted. However, our expectation is that up to half of these colleagues could be redeployed to other customer-facing roles,” said Tesco in a statement.

“We will be doing all we can to help colleagues affected by these changes, including offering redeployment opportunities wherever possible.”

Tesco said it was not planning to make any “significant changes” to its bakeries this year, in spite of media speculation over the weekend.

Those employed by third-party caterers serving hot food in Tesco staff rooms would also lose their jobs as the retailer cuts that service.

All of Britain’s big four food retailers – including Sainsbury’s and Asda who want to combine – are chasing efficiency savings to fund price cuts so they can better compete with discounters Aldi and Lidl, who are still winning market share.

“Whilst this turnaround continues, it does so in a competitive and challenging market,” added Tesco.

Tesco shares were down 1.4 per cent in London in Monday afternoon trading. – Copyright The Financial Times Limited 2019/Reuters