As Musgrave prepares to fight Aldi and Lidl, consumers will win 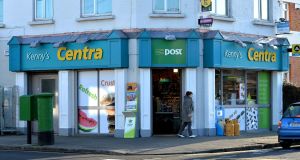 For Musgrave (which owns Centra), profits are up and the market is growing. Photograph: David Sleator

Musgrave results on Wednesday underlined that the SuperValu and Centra owner got lucky when it finalised the sale of its British operation a few months prior to last summer’s Brexit vote.

Profits are up, the market is growing and, apart from its Northern Ireland business, it has reduced its exposure to currency risk.

The comments of its chief executive, Chris Martin, also highlighted that the retailer believes it is ready for the next round of the market assault by German discounters Lidl and Aldi.

Martin reeled off a list of opportunities that he felt were open to Musgrave – from rolling out its Chipmongers franchise to reaching more Irish shoppers through its online business and developing sub-brands for its retail outlets.

Musgrave has developed a hot in-store coffee brand, Frank and Honest, which it has rolled out across much of its estate. It is also toying with the idea of providing seats in larger stores – effectively in-store Frank and Honest cafes.

Martin hinted on Wednesday that it is also working on similar offerings for other product lines. Might Musgrave develop a new branded in-store bakery or butcher counter?

The Irish grocery market is now in growth mode, with the recession now a tiny spot in Ireland’s rear-view mirror. And that means retailers can switch to product-development mode. In straitened times, grocers focus more on price. But when the economic boot is off their neck, grocers and shoppers focus on the quality of what is sold.

Aldi and Lidl are the kings of price. They gobbled up share from the larger incumbents – SuperValu, Tesco and Dunnes Stores – during the recession when price was at the forefront of consumers’ minds.

But now the focus has moved back towards food provenance, buying Irish, occasional luxuries and treats and finding innovative ways to reach shoppers. The German discounters are adapting to this new landscape, but SuperValu, Tesco and Dunnes are more familiar with this game.

When it comes to quality, the bigger incumbents such as Musgrave fancy their chances against the German discounters, which, in turn, believe in their own ability to adapt.

As the grocers fight, the winner will be consumers. Ireland’s vibrant grocery market is a good example of competition in action.