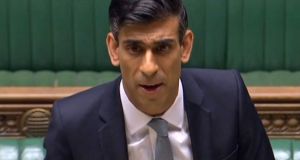 Britain’s chancellor of the exchequer Rishi Sunak delivering his summer economic statement in the House of Commons in London on Wednesday. Photograph: AFP via Getty Images

The UK is dealing with similar economic fallout from coronavirus as Ireland, and so the summer statement by chancellor Rishi Sunak is worth studying for pointers to our own July stimulus package, due to be announced shortly.

The first notable factor is the size of the UK package, at £30 billion (€33 billion), and the fact that despite this some sectors were not happy.

The UK has constructed its support schemes for individuals and companies differently, with much attention on the furlough scheme which has supported people who lost their jobs.

Interestingly, this will end in October; one wonders if a similar signal will be given on the Pandemic Unemployment Payment here.

The UK is providing a range of incentives to encourage people to take employees back off furlough – including a straight-up £1,000 grant.

We can expect a similar direction in Ireland via an extension and tweaking of the temporary wage subsidy scheme and other measures.

These include paying the minimum wage for up to 300,000 people aged 18 to 24 for six months, as well as incentives for companies to take on trainees.

The Irish Government is likely to signal its plans in this area too – and it was mentioned by new jobs Minister Leo Varadkar as a new focus.

Varadkar and his colleagues will also have noted the VAT cut for hospitality and tourism from 20 per cent to 5 per cent for six months. This will increase the pressure for a VAT cut here – though Irish Ministers will note the complaints from excluded sectors, particularly retail, who will not benefit.

Here as in the UK, you can’t keep everyone happy, given the scale of the economic hit.

And Ministers here will also note the words of former Central Bank governor Patrick Honohan, who said at a Royal Irish Academy seminar on Wednesday that, come late this year or early next year, decisions would have to be taken on what industries and companies had a reasonable prospect of survival. And what ones did not.

1 Chairman of Fáilte Ireland resigns after it emerged he is holidaying in Italy
2 Anne Doyle: ‘Depression? I know what it is, and it’s a b*tch’
3 Urgent report on Dublin eviction ordered by Deputy Garda Commissioner
4 David McWilliams: It is time for a major property reset
5 36 hours on Northern Ireland’s Causeway Coast: ‘Everyone is having a wild time’
Real news has value SUBSCRIBE