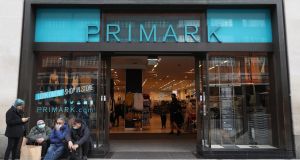 People in masks outside a Primark in Oxford Street in London. Photograph: Yui Mok/PA Wire

Discount retailer Primark has become the first big UK employer to turn down a multimillion-pound bonus the UK government is offering for returning furloughed staff to work, saying the sweetener “should not be necessary”.

The decision by the company, founde din Ireland as Penneys and part of London-listed Associated British Foods, will intensify the scrutiny on how the rest of corporate Britain responds to a scheme laid out by chancellor Rishi Sunak last week.

Under the scheme, companies will receive £1,000 for each furloughed worker they bring back – as long as they are still employed by the end of January next. The plan is part of a wider push to reboot the economy that the UK government announced last week.

However, the scheme has drawn some criticism for not distinguishing between companies that have the resources to bring back employees – and planned to anyway – and those that do not.

In a statement Primark, which furloughed about 30,000 staff as the UK government shut non-essential retailers during the lockdown, said it “should not be necessary” to apply for the bonus, which would have amounted to about £30 million for the retailer.

Department store chain John Lewis, which is owned by its employees, is unlikely to take part in the bonus scheme, according to a person familiar with the matter, who cautioned that a formal decision had not been made. Having furloughed 14,000 staff in April, John Lewis said last week it would not reopen eight of its 50 stores, putting 1,300 jobs at risk.

Paul Johnson, director of the Institute for Fiscal Studies, pointed out last week “how hard it is to target resources only where they are really needed”, and said that many companies receiving the bonus would have rehired staff anyway.

The furlough scheme, which has supported more than seven million jobs, will end in October.

Primark missed out on sales of roughly £650 million for each month that its 375 shops were shut. The company reopened most of its stores in June. – Copyright The Financial Times Limited 2020