Boots staff in Republic not affected by plan to shed 4,000 jobs 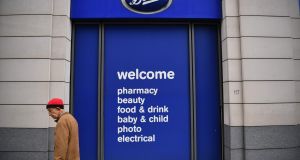 Boots staff in the Republic are not included in the parent company’s plan to shed about 4,000 staff, but staff numbers in the North will be cut. Boots was unable to say how many people work for its operations in the North, which include a flagship outlet on Donegall Place, Belfast.

The company said that its plans to close optician stores and restructure its head office will lead to about 4,000 redundancies, or about 7 per cent of its total workforce.

In the Republic, Boots employs more than 2,000 staff across its 89 stores.

The company’s parent, Walgreens Boots Alliance, on Thursday swung to a loss in the third quarter and suspended share buybacks, as the Covid-19 crisis further weighed on its trouble-laden Boots UK division, leading to a $2 billion non-cash impairment charge.

Walgreens said it plans to close 48 Boots Opticians stores and cut headcount in its UK support office by 20 per cent.

The news came on a tough day for British retailers. Department store group John Lewis said it would close eight stores and lose a possible 1,300 jobs after it predicted that online sales would make up to 70 per cent of its total sales this year and next, from 40 per cent prior to the crisis.

“Closing a shop is always incredibly difficult,” said Sharon White, chairman of the John Lewis Partnership. “However, we believe closures are necessary to help us secure the sustainability of the partnership.”

Most have warned that a recession is looming and they are cutting numbers now before demand drops even further. The news of the latest job losses will come as a blow to UK chancellor Rishi Sunak, who announced a plan on Wednesday to pay employers £1,000 for every member of staff they take back from the government-supported furlough scheme. – Reuters