Cantillon: Signs of rebound evident in Irish economy but still too early to call a recovery 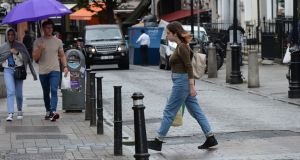 The ebb and flow of government policy on Covid-19 is interesting to watch. Having come under pressure for its plan to open up the economy slowly compared to other countries, the last government in its final days went in the other direction, greatly accelerating the opening plan.

Some reasonably upbeat economic data added to the sense that large parts of the economy might resume successfully.

But experience internationally shows that the road back is tricky. Now the new administration is struggling to decide how to strike the balance – and this shows just how unpredictable the outlook for the economy remains. A briefing after Monday’s Cabinet meeting was decidedly downbeat. The travel sector will have been hoping for an early resumption of free movement without the need for quarantine to at least some countries – now the decision on a green list has been postponed until July 20th and there is no guarantee what this will lead to.

Meanwhile, the promise to open all remaining pubs on the same date will be kept “under review” after weekend scenes outside some pubs that have already reopened.

So far we have seen clear improvements from the floor reached in March. For example, the number on the pandemic unemployment payment has fallen from a peak of 600,000 to 413,000, with signs it will fall quickly further. Consumer spending has also started to rebound.

Unfortunately, we will see a wave of redundancies in the months ahead in the worst-affected sectors and also some pain in the wider economy. While the overall annual drop in industrial production in May of 11.6 per cent might be filed under the heading “could have been worse”, there was a much bigger 27 per cent drop in the traditional sector – mainly Irish-owned companies in sectors like food and engineering.

We can legitimately hope for continued recovery in most indicators, coming from the low point of lockdown. But it will be slow and there will be setbacks and ongoing pain in many sectors. European Central Bank chief economist Philip Lane recently said the recovery would be a case of two steps forward and one back. That sounds about right.