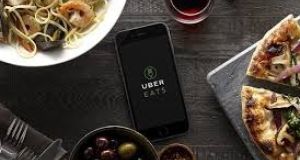 In the UK, UberEats has linked up with a host of restaurant and food chains including McDonald’s and Krispy Kreme, which is due to open in Ireland later this year.

American on-demand ride sharing transportation company Uber is set to bring its food delivery service to Ireland this year, in a move that could see the first home delivery of McDonald’s and Krispy Kreme doughnuts to Irish customers.

The San Francisco headquartered company confirmed on Monday that it plans to launch Uber Eats here in 2018, although it does not have an exact launch date yet.

A spokesman for the online food ordering and delivery platform said: “We’re really excited that soon we’ll be able to offer our Uber Eats app to consumers and restaurants in Ireland. Uber Eats has proved hugely popular in more than 200 cities around the world and we know that Dubliners have already been downloading the app in anticipation.”

Uber Eats will go head-to-head with Deliveroo, the British food delivery group that came to Ireland in early 2015. It has since linked up with 430 restaurants, including Eddie Rockets and Nandos, to offer a delivery service across Dublin, Cork, Limerick and Galway, with a fleet of 900 bike riders.

Last year, Deliveroo said that it added € 15 million to the sale of its restaurant clients and their suppliers, and that it received about 400 job applications a week. Companies such as Deliveroo and Uber Eats typically take a cut of about 30 per cent of the amount spent by the customer on food.

Uber Eats said it would work with delivery couriers who use bikes or motorcycles to deliver food in an average of 30 minutes from when an order is lodged. In the UK, the service has linked up with a host of restaurant and food chains including McDonald’s and Krispy Kreme, which is due to open in Ireland later this year.

As well as enabling restaurants to sell meals “beyond their real estate”, Uber says restaurants also get access to its data insights, which can help “fuel their growth”.

Launched in 2014, Uber Eats is now present in 200 cities, and was profitable in 45 of them in 2017. It moved into Europe in 2016, and been steadily growing its presence, ahead of a planned group IPO next year.

Uber told the Financial Times on Monday it also had plans to open this year in Egypt, Kenya, Ukraine, Romania and the Czech Republic, in addition to more than 40 cities in the UK and 35 in France.

Uber already operates a service centre in Limerick, supporting its business across Europe, the Middle East and Africa, which will employ up to 300 people when fully operational.

1 Who are Ireland’s 17 billionaires?
2 State subsidises public sector retirees to cover gap until State pension
3 My father in a nursing home wants to gift me his house
4 Richer countries must do more to tackle climate change, Thunberg tells Davos
5 Health insurance: Switch often for your financial wellbeing
6 Nama lends Cosgraves €15m to fund huge apartment development
7 Are there annual limits on inheritances or gifts to a child?
8 Builders completed 21,500 homes in State during 2019
9 Q&A: Why has the pension age question suddenly become an election issue?
10 Irish whiskey sales slow in US but distillery visitors top 1m locally
Real news has value SUBSCRIBE