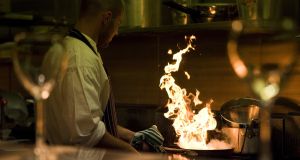 About 84 per cent of restaurants reported difficulties hiring chefs.

The Restaurants Association of Ireland (RAI) has sharply criticised the Government for the crippling skills shortage in the industry that is forcing Irish restaurants to hunt for staff abroad to plug a shortfall of up to 8,000 chefs.

Adrian Cummins, chief executive of the association, said it has been lobbying ministers for several years to get more work permits for non-European chefs, but to no avail. Speaking yesterday at the RAI’s annual conference in Adare Manor in Limerick, he said Shane Ross, the Minister for Transport and Tourism, is “letting the industry down” by not fighting its corner on the issue.

“We’ve been lobbying the Department of Jobs and Enterprise, which is responsible for skills, for seven years on this,” said Mr Cummins. “But we’ve been told that even if the Minister moved on [getting more work permits for non-Europeans], he’d be blocked.”

He claims the Department of Justice, which controls immigration matters, appears to be heavily influencing the State’s stance on the matter.

“There is no joined-up thinking from the Government on this. One department needs to take charge. That should really be the Minister for Tourism, but he is letting the whole industry down,” said Mr Cummins. “He is not fighting for this on our behalf.”

The estimated 7,000- 8,000 chef shortfall is growing by more than 3,000 annually, says the RAI. It wants restaurants to be allowed recruit chefs from anywhere in the world to help address the issue, which the RAI claims is restricting the ability of the industry to expand to meet demand.

Currently, only ethnic restaurants are granted work permits for non-EU chefs. For example, Indian restaurants can seek permits for Indian chefs, and so on. But Mr Cummins claims that even then, permits are hard to get: “Only a couple of hundred were granted last year.”

The RAI is angry that the hospitality industry was not included in the list of sectors in which asylum seekers will be allowed work following a recent Supreme Court judgment on their right to seek employment. Mr Cummins said there must be large numbers of qualified cooks sitting idle in direct provision centres who could be allowed to work in the industry.

He also conceded that the industry itself could do more to address the shortage, and said it may seek State funding for an advertising campaign encouraging young people to consider a career as a chef.

Literature from Global Force, a recruitment consultancy that partners with the RAI to seek chefs abroad, says mid-ranking chefs de partie earn average salaries of about €30,000, while head chefs earn from €45,000 to above €70,000.

Meanwhile, the RAI on Monday released research from BDO suggesting 75 per cent of restaurants are confident about the future outlook, as the booming consumer economy stretches demand for eating out.

One-third of restaurants surveyed by BDO increased staff numbers between 2016 and 2017, while a similar number plan to boost numbers in 2018. About 84 per cent of restaurants, however, reported difficulties hiring chefs.

The industry wants the Government to consider reconstituting CERT, the old State hospitality training body that is now part of Fáilte Ireland, to address the skills shortage.

1 Aldi to impose limits as Christmas toys go on sale
2 Irish elearning company LearnUpon closes €47.4 million investment
3 Bank of America names new EU hub head as Brexit looms
4 S&P sees Irish house prices falling by 1.6% this year
5 Fair deal? Family at odds with hospital and each other not so sure
6 ‘Essential’ retailers risk a firestorm if they exploit the closure of the ‘non-essential’
7 Streaming services set for Christmas battle after drama-filled year
8 What to consider if older person or loved one needs care at home
9 KBC Ireland turns down WRC meeting over hub closures
10 Businesses call for more supports amid ‘devastating’ restrictions
Real news has value SUBSCRIBE