Crippling shortage of chefs, Toyota calls time on diesel and counting the cost of Storm Emma 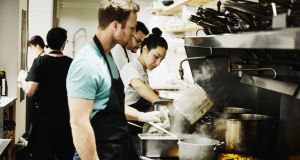 A crippling shortage of chefs is forcing Irish restaurants to trawl Europe for qualified staff willing to move here to cook, as consumers’ appetite for eating out expands

A crippling shortage of chefs is forcing Irish restaurants to trawl Europe for qualified staff willing to move here to cook, as consumers’ appetite for eating out expands. The Restaurant Association of Ireland (RAI), which says the booming industry is short up to 8,000 chefs, has struck a deal with a recruitment agency to bring in cooks from Italy, Croatia and France to meet its members’ shortfall. Meanwhile its chief executive has sharply criticised the Government - and the Minister for Tourism Shane Ross in particular - for “letting the industry down” in its attempts to get more work permits for non-European chefs.

Dublin Town chief executive Richard Guiney has put the cost to Dublin’s city centre firms of lost business to Storm Emma at close to ¤25 million. He said provisional estimates of footfall in Dublin’s city centre show it was about half of what it was last year over the course of the full week.

A bid to resolve a bitter dispute between a son and his mother concerning ownership of the well-known Kilkenny group of design retail stores has so far yielded “no compromise”, the Commercial Court has heard.

Toyota has called time on diesel engines. The car giant announced that it will be phasing out diesel-engined variants of all of its passenger cars from this year. The announcement came on the eve of the opening of the Geneva motor show, Europe’s most prestigious such event, and will be seen as a shot straight across the bows of European rivals, especially Volkswagen Group and PSA’s Peugeot, Citroen and Opel brands, which are still reliant on diesel variants of core models.

Irish software firm Zutec Holdings, which specialises in providing solutions for the global construction industry, is in the final stages of a 57.5 million Swedish krona (€5.7 million) share sale before becoming the first Irish company to list in Sweden this month.

In her media column this week, Laura Slattery considers whether an “Ireland TV Player” - a one-stop online location for Irish TV offerings - could be the local answer to the threat of global giants like Netflix and Amazon.

In Your Money, Proinsias O’Mahony ask why herding is such a problem in financial markets, while Fiona Reddan explains why women should put themselves first when it comes to pensions.