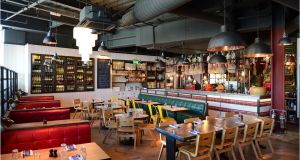 The man behind Jamie Oliver’s Irish business is eyeing the launch of a second Dublin restaurant over the coming six months, despite ongoing challenges in the chef’s UK restaurant empire.

Gerard Fitzpatrick, who launched Jamie’s Italian in Dundrum back in 2012, is “nearly there” with negotiations for the site of a second restaurant, which he hopes will open in the city centre in the next six months or so, as he dismissed fears that trouble in Britain was impacting on the international operations.

Mr Fitzpatrick said he is looking to open a 60-100 seat restaurant in the city centre. “It’s location, location, location. You really need to be in the middle of the strongest footfall possible,” he said, before adding that it was “impossible to get space”.

“Looking for new premises is very difficult. We live in a very small city, and most restaurants want at least 100 seats, which is not easy to come by,” he said. Rent increases also make it “really tough at the moment”.

The new restaurant may be a replica of the Jamie’s Italian Dundrum outlet, offering rustic Italian dishes, or a newer concept, such as Jamie’s Pizzeria, which has already been rolled out in locations like Budapest in Hungary, and which offers thin-crust pizzas, oven-baked pasta specialities, Mediterranean salads, and creamy desserts.

“I’m not entirely sure yet,” Mr Fitzpatrick said.

Mr Fitzpatrick, whose family background is in the restaurant and catering business, also ran the Chatham Brasserie on Chatham Street, but is now focused on the Jamie Oliver business. He said he may also look further afield from Dublin, having taken a look at a possible restaurant in Cork.

The plans for expansion in Ireland come as the TV chef’s wider businesses face significant challenges. Earlier this month Jamie’s Italian said it would close up to 12 sites in the UK as it sought rent reductions and struggled with debts of some £70 million, while the TV chef’s Barbecoa chain, which has revenues of some £7 million, went into administration on February 19th, leading to the closure of its Piccadilly branch and the loss of 80 jobs.

However, Jamie’s Italian International, which has revenues of some £4 million and outlets in more than 20 countries, most of which are run as franchises, is firmly in the black, with pre-tax profits of £2 million in 2016, and has plans to open another 20 restaurants this year.