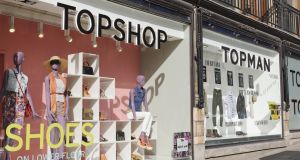 It is unclear how many Irish jobs would be affected. Photograph: iStock

Philip Green’s make-or-break plan to restructure his Arcadia fashion empire would see the closure of six stores in the Republic: four in Dublin, one in Cork and one in Galway. The closures will span Arcadia’s retail brands, including Topshop, Dorothy Perkins, Miss Selfridge, Evans and Wallis.

The flagship Topshop outlet at St Stephen’s Green in Dublin will be among the closures, as will the brand’s shop in the Jervis Shopping Centre in Dublin.

After months of tense negotiations with landlords and creditors, Arcadia is proposing to close a total of 23 of its 566 stores across Ireland and the UK, with the loss of 520 jobs. It is unclear how many Irish jobs would be affected if the proposals are accepted. A further 194 stores would see hefty reductions in their rent, while all 11 Topshop/Topman stores in the US would shut.

Arcadia’s landlords, who range from big real-estate investment trusts such as Intu and British Land to small investment companies and pension funds, still have diverging views on whether to approve the Arcadia scheme, structured as a voluntary arrangement.

“I think the majority will vote for it because of naked self-interest,” said one landlord. “People have no other choice. If we had other tenants we’d be going ‘on your bike, Mr Green’, but we don’t.”

All of the Arcadia stores in Ireland and the UK  will "continue to trade as normal" ahead of Arcadia's crunch meeting with creditors on June 5th as it seeks approval for the closure plan.

The full list of Irish stores to be closed is as follows: