Move to online retail only very gradual, according to study of spending 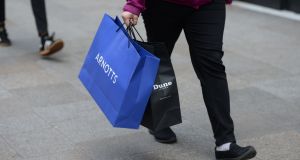 Of the instore transactions that made up the bulk of card sales, 44 per cent of the €7.6 billion was spent on groceries and non-alcoholic beverages. Photograph: Alan Betson

An analysis of €9 billion of retail credit and debit card transactions by AIB Bank found that 86 per cent of the purchases were made instore last year. The remaining 14 per cent occurred online, just a single percentage point increase over 2017 and two percentage points over 2016.

The statistic was contained within a presentation on Wednesday morning by AIB’s chief analytics officer, Jonathan Duggan, who was speaking at the annual expo of industry lobby group Retail Excellence, at the Citywest convention centre in Dublin.

About 2,000 delegates are attending the two-day conference and exhibition, which kicked off on Tuesday.

Mr Duggan’s presentation drew on data accrued from hundreds of million of card transactions, stripping out purchases such as flights and other non-retail items to provide a snapshot of activity purely in the retailing industry.

Of the instore transactions that made up the bulk of card sales, 44 per cent of the €7.6 billion was spent on groceries and non-alcoholic beverages, AIB estimated. About 17 per cent was spent on clothing and footwear.

The data was also parsed to ascertain the effects on grocery sales during the major weather events of 2018, including the Beast from the East snowstorm early in the year and the major summer heatwave. Grocery sales on some days of the snowstorm were down up to 85 per cent compared to usual, while they rose as much as 15 per cent on certain heatwave days, underlining the dominance of instore sales in the sector.

Mr Duggan also mapped the data against screenings of the television series, the Great British Bake Off, showing that bakery sales spiked when the programme was aired.

Spending by UK visitors peaked in summer and again in December, while US visitor spending was heaviest during summer months.

1 Farmer seeks to challenge €3.6bn Intel plan in High Court
2 Fallon & Byrne founders McHugh and Byrne exit group
3 Cosgrave should give his speech to Web Summit’s partners in Saudi Arabia
4 Paschal Donohoe's biggest regret: 'Not managing the National Children’s Hospital better'
5 Election proposals may make the housing crisis worse
6 RTÉ’s multiple lobbying meetings with politicians
7 RTÉ set to spend €350k on hotels – but celebs will have to buy their own alcohol
8 Who are Ireland’s 17 billionaires?
9 ‘If you don’t like challenges, you should not be in the airline business’
10 Ireland’s love affair with Apple as passionate as ever
Real news has value SUBSCRIBE