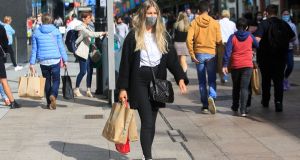 Henry Street in Dublin is said to have proven much more resilient than its south-side sibling Grafton Street. Photograph: Gareth Chaney/Collins

Retail and consumerism have always showed a contrast between the haves and the have-nots. The coronavirus pandemic has ensured that the concept is not confined to shoppers; the industry itself has been split into two camps.

Any headline assessment of the industry suggests it is in crisis. Consumer spending was down 22 per cent in the second quarter, during which much of the hard lockdown fell. Consumer confidence fell off a cliff and crashed through the canyon floor below. A tidal wave of redundancies and insolvencies has only been held off by Government subsidies that cannot go on forever.

Scratch the surface, however, and the situation is far more nuanced. Some retailers are performing absolutely terribly during the pandemic while others are doing very well indeed. Retail sources say that specific segments have boomed since stores were allowed reopen during the summer.

Furniture and household goods retailers are having a grand old time as house-bound consumers invest in making their their homes more comfortable. Pet shops, which were allowed to trade during lockdown, also boomed as lonely consumers sought out new companions or invested in treats for the furry friends they already owned.

Meanwhile, as gyms were shuttered during lockdown, online retailers of fitness equipment were swarmed by consumers looking to stay in shape. Indeed, any retailers with sophisticated online operations performed strongly during lockdown. The household goods and furniture chain Harvey Norman, for example, told its Australian investors that its sales here over the period were up more than 20 per cent year-on-year, driven by its website.

Grocery retailers are up about 20 per cent. Menswear is a “disaster”, according to one major retailer, but kids apparel and womens wear is doing well.

The discrepancies even come down to streets. Henry Street in Dublin is said to have proven much more resilient than its southside sibling Grafton Street, which has been devastated by the disappearance of nearby office workers.

The retail sector is in trouble, but the distribution of the pain is complex. That suggests that any further State aid for the sector should be just be as discerning.